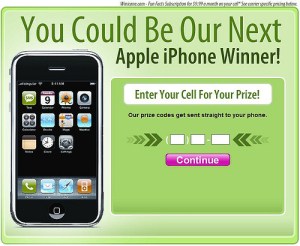 A phishing scam spread quickly on Twitter throughout the weekend — so quickly that Twitter had to put a message up on the main site telling users not to sign in to fake Twitter URLs sent by direct message from people they follow. Now another scam is apparently erupting, and this time there’s an enticing prize: A free iPhone.

Blogger Jerell Klaver of twitterTRUTH says he received nine direct messages in the span of a few minutes from people he follows suggesting that he click on a link to win a free iPhone. One of the messages claims that the user who sent it already had won a free one. Those links forward to two separate sites, both of which include graphics advertising a free iPhone and asking for contact information.

The last scam spread by capturing people’s Twitter usernames and passwords and spamming all of its followers. This one appears to be doing something similar, but it’s not entirely clear how it is getting the Twitter login info yet.

Twitter chief executive Evan Williams just tweeted that they are looking into the matter.

As they say, fame is a bitch. Twitter is growing in popularity, so now people are out to manipulate it for profit or malicious purposes. Expect to see a lot more of this.