What were you doing at 9:30 a.m. Eastern? You certainly weren’t ringing the NASDAQ’s opening bell as Facebook CEO Mark Zuckerberg was doing. But what Zuck did simultaneously is perhaps even cooler. 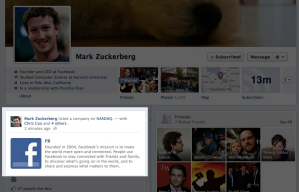 “Mark Zuckerberg listed a company on NASDAQ. — with Chris Cox and 4 others,” reads Zuckerberg’s Friday morning update (see screenshot to the right).

The unusual status update went live right as Zuckerberg rang the opening bell, which can only mean that the social network configured the update especially for today’s special occasion. To do so, engineers used Facebook’s Open Graph API, which lets developers create custom actions, like “read a book,” “listened to a song,” or, in this case, “listed a company.”

In fact, clever Facebook engineers actually “hacked” the NASDAQ button to post the update, goes the story told by David Garcia, a senior software engineer at Facebook, on TechCrunch.

“We hooked up our hack to run at exactly the same time as Mark pushed the button to turn on the light and ring the bell. Then we attached a wire that hooks to the hack and into the headset jack of a cell phone,” Garcia said. “When the button was pressed, it sent a signal through the hack, and the phone got the signal that triggered the custom action through our Open Graph API, posting a story onto Mark’s Timeline. It worked.”

Facebook yesterday priced its shares at $38 apiece for a $104 billion valuation. The social network will raise $16 billion (up to $18.4 billion with its over-allotment option) in its long-awaited initial public offering on the NASDAQ later today. Shares are expected to begin trading around 11 a.m. Eastern today.