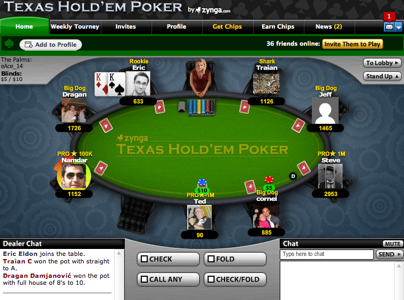 Social gaming site Zynga has just become the largest application developer on Facebook, with more than 40 million monthly active users according to AllFacebook and AppData. This title changes hands quite often, but it’s perhaps more significant in this case because of how much money I hear Zynga is making through all these users.

Rumors have been circulating for a few months that it is on track to make up to $50 million in revenue this year — a number I heard just last month. Most recently, though I’ve heard that it might be a little lower: $40 million, around half of which comes from its Facebook apps and half from apps on other social networks. I’ve also heard that at least as of a month or two ago, around 75 percent of the San Francisco company’s revenue was coming from the sale of virtual poker chips for its popular Texas Hold’em poker application on Facebook, Myspace and other sites.

The poker application has more than 12 million users on Facebook alone — but a couple of other applications are likely increasing Zynga’s revenue. One is Mafia Wars, with nearly 9.5 million monthly active users on Facebook (Zynga also has a popular MySpace version of this app). Another is virtual world app YoVille, which has more than 5 million monthly active users. These games include ways for users to buy points for things like weapons or clothing, or earn them through offer-based promotions like credit card offers.

I’ve been hearing similar revenue numbers about other social game developers — and I don’t mean the major-league companies in Asia. For example, Playdom may be around $10 million per quarter from games on MySpace (it only recently launched games on Facebook, so I don’t know how it’s doing there). Other gaming companies like PlayFish, SGN as well as smaller developers — and related companies like offer providers — are also reportedly seeing the money come in.