A Swedish company has today lifted the lid on an ambitious new project to bring electrically powered driverless trucks to market, with a view to cutting harmful emissions.

Einride is touting not just a truck, but what it calls “a new transportation system” consisting of futuristic-looking vehicles called T-pods that the company claims will change the entire trucking industry and “improve the sustainability of mankind.”

Bold words for sure, but the company’s goal is to have an active fleet of 200 T-pods running in Sweden by 2020, and Einride has stated that “partners and clients” have already signed contracts at 60 percent of its planned capacity. The company plans to launch its first route between the Swedish cities of Gothenburg and Helsingborg, with the initial system carting more than two million pallets each year.

Each pod is 23 feet (7 meters) in length and can hold 15 “standard” pallets, for a total weight of 20 tons when full. The pods will be able to travel 124 miles on a single charge, and Einride is currently developing compatible charging stations.

The T-pod actually adopts a hybrid driverless approach. On highways the vehicle is capable of total autonomy, but when it exits onto main city roads it switches to remote control, with each pod controlled from afar by its own dedicated “driver.” Basically, each driver monitors several pods at once on the highways and can intervene should the situation require it, but when the truck is on city roads it’s one driver per pod.

It’s not entirely clear how much more efficient this will be than having a person sitting inside the vehicle, given that there are still people controlling the T-pod remotely. But Einride provided the following statement on some expected benefits:

The Einride system doesn’t only benefit the environment, but also improves road safety, creates new jobs, and provides more cost-efficient transports for purchasers. A ‘T-pod’ is the height of efficiency; personnel don’t have to stand by as it charges or spend an excess of time away from family and friends, and overall client logistics will be more flexible.

The company also provided VentureBeat with this computer-generated mockup of roughly what the vehicle will look like when complete. 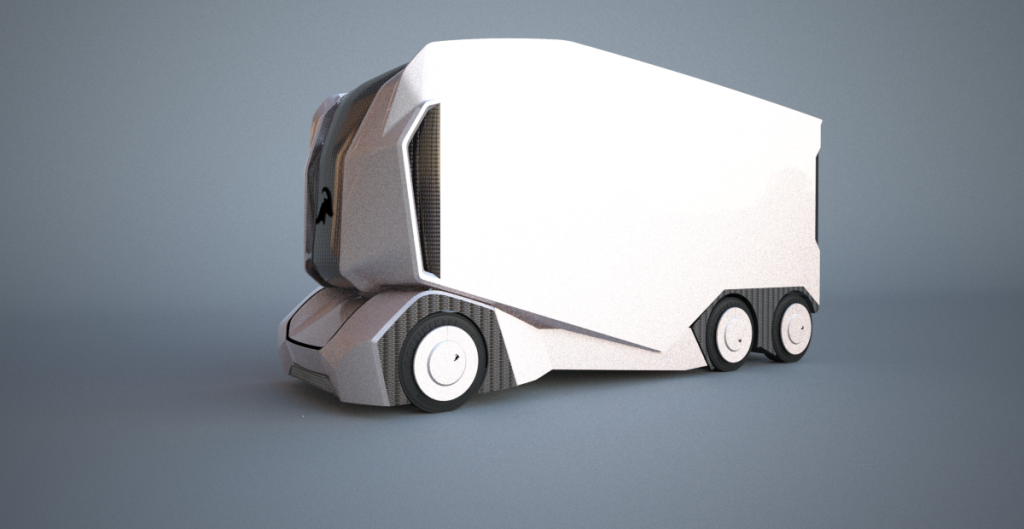 Importantly, there is no physical space inside the pods for a human to sit — these have been built entirely with autonomy or remote operation in mind. And based on Einride’s concept design, there will be no windows (why should there be?).

“Our vision is to enhance the lives of all people through the delivery of a global, impact-positive supply chain infrastructure,” explained Einride CEO Robert Falck. “We don’t believe our work is done when we’ve achieved carbon neutrality. Our design process is driven by our goal to have a net positive impact — whether that’s improving the lives of transport workers or reducing road traffic accidents, every element of our system aims to have a measurable positive impact on the planet.”

A number of other (non-electric) self-driving truck startups have come to the fore recently. Earlier this year, Embark launched a highway autopilot system that it hopes will serve as the brain to power autonomous trucks — and similar to Einride it’s aimed at employing autonomous driving only on the highway. When Embark’s truck enters city boundaries, a human driver who’s sitting inside the truck takes over the wheel. Elsewhere, Uber-owned Otto reckons self-driving trucks will be cruising U.S. freeways within a decade, though both Uber and Otto are currently facing heat from Alphabet over alleged patent infringements.

Einride is self-funded, with some private investment on board, though Einride wouldn’t divulge any numbers or names.

“Einride is transforming the existing transport chain from the ground up,” added Einride COO Filip Lilja. “The big companies behind long-haul trucks keep building bigger trucks to increase efficiency, which ultimately means even more emissions. We are changing that by creating a secure solution that is not only cost-effective, but dramatically minimizes the negative environmental impact of the transportation industry.”