A day doesn’t go by without self-driving cars hitting the headlines — Honda is just the latest company to reveal its plans, with the Japanese carmaker aiming to put autonomous vehicles on city roads by 2025.

But long before self-driving cars hit conurbations around the world, we’re already seeing an uptick in autonomous vehicles aimed at very specific, niche scenarios. Volvo is one company that has been ramping up its efforts to test these vehicles in select industries — with an eye to improving speed, safety, and efficiency.

The Swedish automotive giant’s latest effort is a self-steering truck that’s being trialed to help sugarcane plantations avoid damaging young crops. Sugarcane is among the world’s largest crop in terms of the quantity produced, and the aim of this trial is to further increase that yield. Large trucks typically drive alongside the harvester at a low speed to transport the crop off-site, however, as much as 4 percent of the yield can be lost as fledgling crops are trampled by trucks. This is, ultimately, due to human error — which is why Volvo is working toward automating the process. 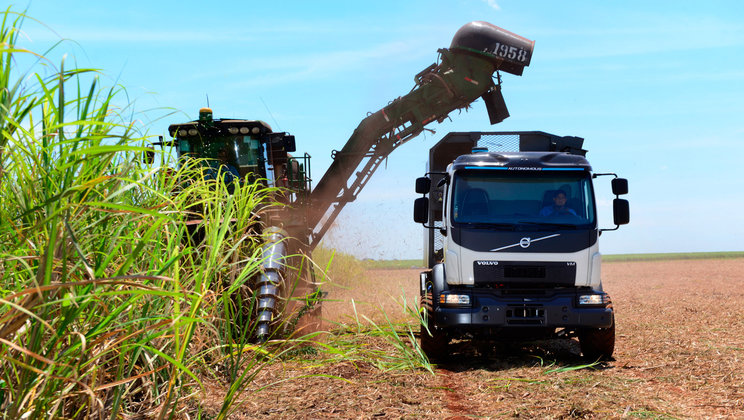 The Usina Santa Terezinha Group operates in the southern Brazilian municipality of Maringá, where it produces sugarcane crop to make sugar and ethanol.

During the past harvest, the company served as a test bed for Volvo’s autonomous effort, which involves a driver assistance system that automates steering. It’s basically designed to ensure that the truck maintains a precise course at all times, using coordinate-based digital maps and GPS to traverse the field as gyroscopes ensure that the truck never deviates more than 25 mm from its predetermined course.

It’s worth noting here that there is still a driver inside the truck, someone who can accelerate or decelerate manually or with the aid of an on-board cruise control, but the point of the exercise is to free the driver from having to concentrate on steering, which can be exhausting and is particularly error-prone — all he or she has to worry about is the speed of the vehicle.

Above: Inside the truck

“With this solution, we will soon be able to significantly increase the productivity of our customers in the sugarcane industry,” noted Volvo Group’s Latin America VP, Wilson Lirmann. “At the same time, we will improve their drivers’ working conditions and safety. This, in turn, will make the job more appealing and make it easier to recruit and maintain drivers.”

The Brazil trial follows hot on the heels of similar autonomous trials elsewhere. Last year, Volvo announced it was testing a self-driving truck in underground mines in Sweden, while a few weeks back it kicked off an autonomous garbage truck trial.

Ultimately, the tests are about evaluating “degrees of automation,” as Volvo puts it, and exploring how the technology can enhance productivity.

While self-driving car trials are ongoing throughout the world, it will likely be a long time before fully self-driving automobiles are commonplace. But Volvo’s recent industry efforts are more than just “experiments” — many could progress to permanence in the near future. The Brazilian sugarcane trial will be expanded to include field-testing more vehicles this summer, with commercial availability following “in the foreseeable future.”