Here’s the Mercury News story (free registration) that ran yesterday about Stuart Bailey, 34, who weighed 370 pounds five years ago. But then he started his company, Infoblox, and started taking Tae Kwon Do lessons from a Korean master. It disciplined his mind, and he also shed 150 pounds.

As usual, we left some tidbits out of the newspaper version because of space, but clearly one of Bailey’s biggest tests was how he managed the venture capitalists. He chose to take money from the firm that many say is the toughest in the business: Sequoia Capital. But Bailey says he was ready. In checking out the company, Sequoia would send over four different people, and they’d…

…grill Bailey in all-day meetings. “It was grueling,” Bailey recalls. “It was not unlike sparring. You have to size up who you’re talking with, and engage.”

They encouraged him to move to Silicon Valley from Chicago. But he brought his Tae Kwon Do teacher, Master Soon-Chul Kim, with him (Kim is in middle of picture, below). The company now has 11 black-belts. It has helped with team work. Now Bailey says everyone is on board and focused on the same goal: an eventual IPO. He hasn’t given a date. We wish him luck. 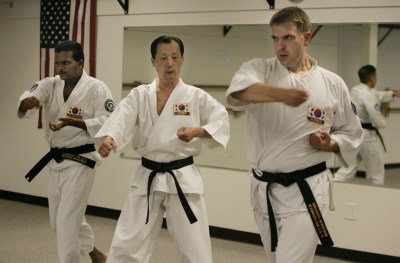 Here’s some info about the company:

Name: INFOBLOX
Founded: 2000
CEO: Robert Thomas
Location: Originally Chicago; moved to Sunnyvale in 2003
Investors: Sequoia Capital, Lehman Brothers and others have invested more than $64 million.
Number of employees: 165
What it does:
— It sells an appliance that allows companies to operate their information technology networks more efficiently.
–The appliance stores information about network users — both external and internal — and decides which devices and applications they can access.
–It manages the so-called DNS, or Domain Name System (the so-called Internet phone book), allowing users to access a company’s Web sites.
–And it provides addresses to users wanting to access network devices, and manages user names and passwords to determine who gets on.