PicksPal wants to be the “American Idol” of sports games. It is just the lastest online sports site to offer fans a way to compete against each other — or against themselves — in a powerful online medium where thousands, potentially millions, of fans oogle at each other’s success, or failure. We have a lot of guy friends who bet on sports and are addicted to fantasy leagues, and this could be a hit if it spreads virally. 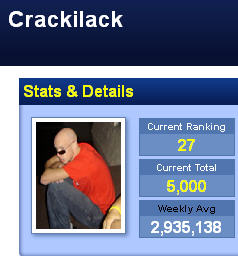 Here’s how it works. It is free, and users compete in a weekly game, earning points by correctly picking event outcomes from real events based on real odds. The results are tabulated on Sunday evening, and winners are announced.

It gives winners coupons for $200 to spend at Ticketsnow.com, on things like concerns or sports events. The main incentive, however, is that reliable male competitive spirit, where office mates and fraternity brothers want to prove they are the best, says founder Tom Jessiman. And he’s unveiling another product next Tuesday, called “Genius Picks” where regular fans can pay for access to the collective wisdom of the site’s 30 best pickers over the last 5 weeks for $19.95. This is where it could get interesting.

There are small group of guys — a dozen or so — who just keep winning, said Jessiman. The site is nearing 100,000 registered users, and the small cadre of winners is proving better than most Sunday morning sports pundits on ESPN, Jessiman said. “I’d put Pickspal guys up against those guys and destroy them nine out of 10 days in a row,” he said.

Take Crackilack, pictured above. He has won three of the last five weeks, and last Sunday got 31 correct picks out of 32. He’s also making some heavy bets on some longshots, forcing Jessiman to check the Pickspal security to see if Crackilack was hacking the system. “I don’t know what planet this guy is from,” he said.

The top players apply the same techniques as top stock-pickers, says Jessiman. They diversify, they research and are frequent players — and they trust their instincts. He compared it to the real investment world, where plenty of hedge funds claim success, but only a few like Warren Buffett stand out. He’s thinking of applying PicksPal’s model to other sites, one on Hollywood picking and another on stocks.

Jessiman is a veteran sports site guy, having helped run CBS SportsLine, and later a sports portal in Europe called Sports.com. He then built Oneup.com, a social networking site for Ziff-Davis. Combined, these companies spent hundreds of millions of dollars on marketing and editorial teams, he said, and he’s felt the pain when advertising dollars dried up. So he’s looking for a cheaper model, and one that relies on advertising and premium offerings (such as Genius Picks).

Jessiman spent a year bootstrapping the company, while working on other projects. Then he approached some VC firms in June 2005. Canaan Partners invested $2 million. In February, Canaan and Bay Partners invested another $4 million. He has 12 people, based in Mountain View, right next to Google on Landings Drive.

Techcrunch also has a piece on PicksPal today.

As for competitors, there is San Mateo’s Protrade, which turns athletes in stocks, which you can bet on. There’s Sportingo, in Europe.

There are a number of other new blogging sports sites. One valley start-up is Emeryville’s Yardbarker, a Web 2.0 way of delivering news. Techcrunch had a review of them a while ago here. We talked with founder co-founder Peter Vlastelica, 28, recently.

The site aggregates content from sports bloggers. It then lets users rank the news they like — with the best news floating to the top. Yardbarker is getting buy-in from big sports bloggers, who see Yardbarker as way to juice their traffic.

Meanwhile, Yardbarker benefits because fans come to see the best news about teams and players they like. The news can be ranked by player, group of players or teams — something that local newspapers or sports channels don’t often give. With the advent of fantasy sports and sites like Pickspal, fans are generating loyalties that extend beyond their geographic location. You can create watchlists based on RSS.

Yardbarker embarked on a clever grassroots campaign. It researched top 2,000 bloggers before launching, and encouraged them to put links on their blogs allowing people to vote for articles on the blogs be submitted to Yardbarker. Competition broke out, and now all bloggers want the link, says Vlastelica.

Vlastelica is a Stanford undergrad, and worked for Walt Disney in London, and worked briefly in New York’s Silicon Alley. Mark Johns, Ophoto.com, and Jack and Jeffrey Kloster, of Berkeley, fill out the team.

They got 15,000 visits a week after launch last month, but it’s still early days. They got a small seed round from friends to kick them off, and they’re considering a larger round, either a large seed, or small venture round, Vlastelica said.