Kleiner Perkins, one of the most respected venture capital firms in Silicon Valley, but also one of its most parochial, has finally decided to invest in china.

It has just announced a $360 million China Fund, to invest in “high-growth industries,” including Internet, media, wireless, health and green technologies. To help it make the investments, Kleiner has hired three partners from the Shanghai venture firm, TDF Capital, and another partner from Softbank Asia Infrastructure Fund.

The announcement tonight comes after VentureBeat learned of the fund more than a week ago, and sought comment from the firm on details.

This marks a big turnaround, and is an important and essential move for Kleiner. Until recently, Kleiner had famously resisted opening offices elsewhere, saying it was well-served by staying local. It was hard to argue with: Kleiner has backed a long list of Silicon Valley hits: Sun Microsystems, Netscape, Genentech, Google — the list goes on. For 35 years, the firm remained cocooned in Menlo Park, Calif., where it has worked out of its single leafy office on San Hill Road, but remained among the very best firms.

But the pressure to expand horizons increased. A wave of China and other foreign investments has reaped big rewards for other firms. Competitor Draper Fisher Jurvetson has done well, hitting two home runs with Skype in Europe, and Baidu, the search engine, in China. DCM, another firm, has seen multiple successes. Even arch-rival Sequoia set up a China fund. The curmudgeonly erstwhile leader Don Valentine insisted that investing abroad was a huge risk, but he was overruled by younger partners led by Michael Moritz. Sequoia moved to China more than a year ago, using a similar strategy of hiring a team already there. 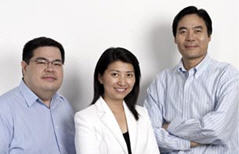 Kleiner’s offices will be in Beijing and Shanghai. The partners joining Kleiner from TDF are David Su, Tina Ju, and Forrest Zhong (in order, at left). The partner from SAIF is Joe Zhou (below left)

Ellen Pao, a partner at Kleiner, who has helped manage the relationship with China (we told you so) told VentureBeat that Kleiner grew comfortable with the TDF team over the past year while working on a joint investment in Shanghai company YesPPG, a men’s shirt retailer.

Kleiner valued the experience of Tina Ju, and Zhou, in particular — both have been investing in China since 1999. Ju is a UC Berkeley engineer and Harvard MBA, and has backed Alibaba, Baidu, Cgen, China Netcom, Focus Media and Hurray. Prior to 1999, she worked in investment banking at Deutsche Bank, Merrill Lynch and Goldman Sachs. Zhou, meanwhile, helped SAIF investments in Shanda, Acorn, ATA, Alchip, Unionpay Merchant and Yasi.

Kleiner is making the move in time to save face. China’s economy is still booming, and investment community is still relatively small. Kleiner’s clout here is still enough to give it good name recognition over there. Still, the foot-dragging was considerable. Retired partner Tom Perkins had prodded the company to think globally, and he griped to us five years ago that the partnership had shrugged him off. Two and half years ago, partner Brook Byers, when asked about China, said: “I can’t see doing it” (see interview below). More notably, Kleiner has become a follower, with Sequoia, its rival for top-dog status, leading the way.

John Doerr, the firm’s leading partner, makes a big deal about being within driving distance from portfolio companies. As he likes to say: If a VP of marketing at one of his portfolio companies is threatening of leave, Doerr can jump off Hwy 101 at the nearest exit, visit him, and persuade him to stay. Under this model, he can still do that.

KPCB China also includes principal Ian Goh and CFO Nancy Sun, with plans to increase the number of team members in the next 12 months.

Here’s an excerpt from the Q&A we had two and a half years ago with John Doerr, Ray Lane, Brook Byers and John Denniston about China (emphasis ours):

Q: Looks like Silicon Valley VCs have started a race to invest in China. Yet Kleiner Perkins is standing on the starting line. Are you comfortable staying local?

Doerr: We might open an office on Mars. (Amazon Chief Executive Jeff) Bezos will fund it.

Doerr: We don’t have any Asia or India initiatives, but I’d say all the partners go both places often… because the region is important for the ventures we help.

Lane: If one of us were in India or China all the time, we would know more about India and China, no question about it. But we would give up a lot that we get by living in the same office.

Byers: Matt, Kleiner Perkins is basically a service business. The question is: How do we add real service to entrepreneurs, how do we stay up with them, how do we follow what they need? That changes over time, and then we have to adapt and change. All the venture firms on Sand Hill Road are different, and that’s good for the entrepreneurs because they have a variety of different styles to choose from.

Lane: We’ve been well-served by staying in the same place.

Byers: It gets back to this culture thing. We like collaboration. We spend every Monday, and many Tuesday mornings together, in this building, sharing ideas, about what we’ve learned in the prior week, and how we can help. We meet with entrepreneurs. We form subgroups of partners to work with ventures, right away. That would be really hard to then spread around. Um, I can’t see doing it.

Q: How will Silicon Valley manage China’s emergence into an economic powerhouse?

Doerr: We can have an hour-long conversation about the quality of our education system.

Byers: We can talk about policies that would hurt. Stock options.