(Update: VentureBeat has now confirmed this with a source, who says details have to be wrapped up before an announcement is made. There is no exact price yet, because that is one of the things still being negotiated. It is somewhere between $400 million, which is Photobucket’s asking price, and $200 million, which is what MySpace asked for. Also, see latest stats below.)

Photo-sharing site Photobucket has agreed on terms to be acquired by the giant social network Myspace, Valleywag first reported.

Despite the lack of attribution, details being linked strongly suggest there’s something to this (and others are now saying the purchase price is $250 million). We’ve just gotten off the phone with Alice Lankester, senior director of product marketing, who said the company is not commenting, but that she’d let VentureBeat know if there was anything to say. Valleywag often gets it material from rank and file employees slipping rumors to the publication. Much of it is accurate. Much isn’t. (Update: In this case, it was accurate).

Photobucket is a convenient service for storing and sharing photos and is used by many MySpace users, who link to their Photobucket photos from MySpace. Photobucket’s robust growth has been a thorn in the side for MySpace, which is jealously trying to offer its own photo-sharing service. See stats below for the latest from Hitwise traffic, which shows Photobucket now commands a 40 percent market share in photo sharing. The two have come to blows several times (VentureBeat’s coverage), with MySpace arguing Photobucket’s marketing strategies violate its terms of service. But the two patched things up recently without explanation — another hint.

Photobucket has called an all-hands staff meeting for 10am PST this morning, ValleyWag reports. Photobucket’s bankers, Lehman Brothers, were reportedly looking for a purchase price of at least $300 million.

This would be a huge deal for co-founders Alex Welch and Darren Crystal, who started the company in 2003, and for Trinity Ventures, which invested $10.5 million last year. Tom Cole, partner at Trinity and Photobucket board member, also said he couldn’t comment. Before last year’s round, Photobucket raised $2.5 million from individual investors.

Here are the stats from Hitwise: 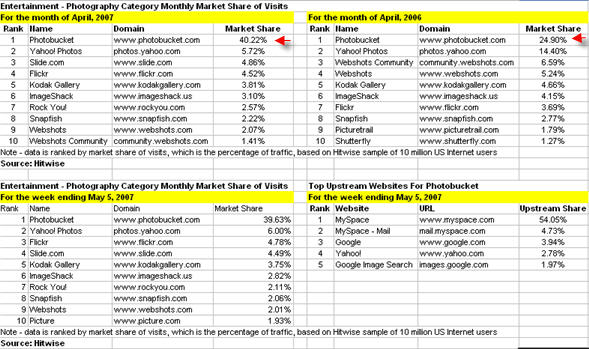