The buzz on the expo floor was about Silicon Valley gaming startup Elementeo and its precocious 13-year old founder and chief executive, Anshul Samar. “We inject fun into education,” the fast talking entrepreneur confidently proclaimed, touting his new fantasy role playing board game which he believes will change the way kids learn chemistry.

The conference featured keynote presentations from the likes of Marc Benioff (Salesforce.com), Vinod Khosla (Khosla Ventures) and Tim O’Reilly (Web 2.0 thinker), but the young Samar better represented the theme of this year’s conference: “The New Face of Entrepreneurship.”

Samar argues that textbooks are boring and kids would rather spend their time battling enemies, blowing things up with bombs, and yes, even giving their opponents lead poisoning. So he created a fantasy role playing game that combines the rapturous teenage joys of competition and carnage with the exciting properties of the periodic table of chemical elements.

Here’s how the game works: You command an army of chemical elements, compounds and catalysts — represented within a 66-card deck (the fire and brimstone card at left is for “Sulfur,” for example). Your opponent has his own deck with the same number of cards. Your goal is to battle your competitor and reduce his IQ down to zero. Pit your oxygen card against your opponent’s iron card, for example, and you learn that you create rust. Score one for oxygen. Kind of like rock-paper-scissors, but with chemicals, dice and 66 impressively illustrated cards featuring monster-themed caricatures of chemicals.

Samar would kick my butt in this game. At least I’d probably learn more about chemistry in an hour of game play than I learned in my high school chemistry class a couple decades ago.

Like all good Silicon Valley entrepreneurs, Samar was taking orders at the show even though he won’t start shipping product until he either receives his first 2,500 orders, or he closes a decent round of funding, whichever comes first. As of Saturday, he had already booked 450 pre-orders.

Elementeo’s initial seed funding, which was used to design prototypes, came in the form of a $500 grant from the California Association for the Gifted.

Now Samar says that if he can get $100,000 in funding, it will help him achieve his goal of $1 million in first year revenues by the time he graduates eighth grade in June 2008 (Unlike most Silicon Valley companies, Mr. Samar’s fiscal year ends at the start of summer vacation).

So what happens once the company secures funding? Will Mr. Samar and his team follow in the footsteps of Bill Gates and Mark Zuckerberg who famously dropped out of school (in this case, Lawson Middle School in Cupertino) to pursue their ventures full time? 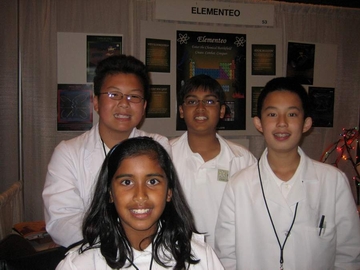 Samar’s sister, who at age 11 serves as the company’s vice president of sales, jokes that after they’re rich, they can hire someone to do their homework. “Just kidding,” she emphasizes.

The company is considering an online version of the game, as well as extending the brand to include games for biology, math, and other school subjects they’ve identified that have “boring textbooks.”

TiECON 2007, attended by 3,800 people, concludes today (Saturday) at the Santa Clara Convention Center. Meg Whitman of eBay keynotes at 9:00am.