Lending Club, the newest entrant in the emerging person-to-person lending market, is launching tonight on the Facebook platform.

The Sunnyvale, Calif. company has raised $2 million in angel funding to join the handful of companies that aim to cut banks out of the personal loan market. These companies have an edge because they offer lower rates to borrowers and promise lenders higher rates than they’d otherwise get in a savings account.

Online peer-to-peer lending services, Prosper, Zopa and CircleLending all have significant lead time and lots of venture backing; Zopa, for example, has raised around $34 million. But Lending Club is the first of its kind to integrate its services into a social network.

The social networking angle allows Lending Club to leverage trust. Though not a social network, CircleLending, which Virgin USA just bought, nevertheless positions itself as an intermediary for loans between relatives and friends. Both Zopa, based in the UK, and Prosper, of San Francisco, facilitate loans between complete strangers. Lending Club sits somewhere in between: According to CEO Renaud Laplanche, the goal is not to get friends to lend to friends, but to use the Facebook platform to enable lenders to find borrowers within shared networks, like groups or schools.

Lending Club’s process is quite similar to those of its competitors. Would-be borrowers go to the Lending Club application within Facebook and enter in their personal information and the amount they’re looking to borrow–a minimum of $1,000 and a max of $25,000.

Lending Club analyzes their credit rating and suggests an interest rate — between approximately 7 and 12 percent, at which they should expect to get a loan. They then choose a screen name to protect their privacy. If they want, they can put a line on their profile page that lists the amount they want to borrow, the interest rate they’re willing to take, and the percentage of the loan they’ve amassed so far.

Lenders who sign up enter in the amount they’re willing to loan and the interest rate they want. Then the Facebook platform gives Lending Club a boost: Lending Club uses what it calls “LendingMatch” technology to pair the two parties based on shared connections it finds. While it currently only uses criteria like shared schools or groups or geography, Lending Club plans eventually to link people through friends of friends. It does this without giving lenders direct access to borrowers’ Facebook profiles.

The company has 18 employees, including former executives from Mastercard, Wells Fargo, and eBay. The sources of the angel funding are undisclosed. 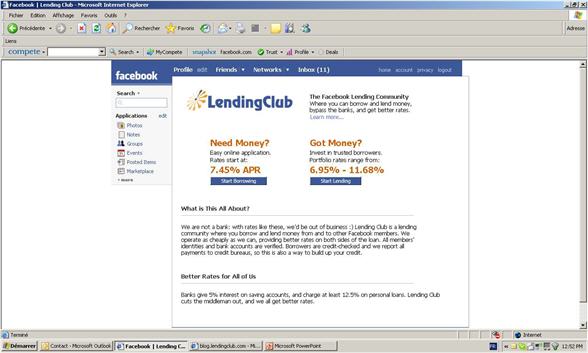