Palm Inc., the smart-phone maker, will reportedly sell a 25 percent stake to a private equity firm Elevation Partners, of Silicon Valley, for $325 million.

The move, reported by the WSJ, comes after two years of a sideways trading stock (see chart below), a recognition that Palm faces ever increasing competition, and indecision about what strategy it should pursue.

It also comes after a former employee of Palm, Gibu Thomas, argued in a column at VentureBeat recently that Palm should not sell to a private equity firm. There, he argued that Palm should get over aspirations to be the “next Apple,” and sell to a corporate strategic investor — because the forces of competition are too great.

Notably, Elevation Partners has ties with Apple, and it plans to introduce some former Apple talent to the Sunnyvale, Calif.-based Palm. Jon Rubinstein (pictured above left), Apple’s former head of hardware who helped oversee the creation of the iPod music player, will join Palm as executive chairman and head up product development, according to the WSJ. Fred Anderson, a partner at Elevation, was a former Apple chief financial officer, will join Palm’s board (recently his relationship has soured with Apple’s Steve Jobs). Another Elevation partner, U2’s Bono, helped introduce the U2 iPod. And of course, Roger McNamee, another partner at Elevation, known for the prolific devices that adorn his belt — now likely to carry both a Palm Treo and an iPod — will also reportedly join the board.

This all comes, of course, just as Apple is to unleash its highly anticipated iPhone. And Palm recently unveiled the rather perplexing Foleo — designed to be a companion to Palm’s smartphones, but never quite making the case as to why it is any better than a laptop (at least in our view).

According to the WSJ, Palm will “pay $940 million in cash, or about $9 a share, to existing shareholders whose ownership of the company will drop to 75 percent under the deal’s terms. The company will fund the restructuring with the $325 million from Elevation, $400 million in new debt and more than $200 million of cash on its balance sheet to complete the transaction.

According to the terms, Elevation is paying a 16 percent premium on Palm’s price, the WSJ said. 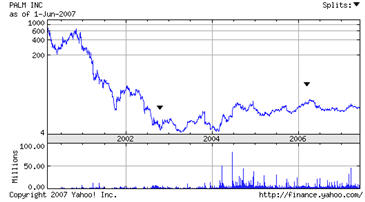