Sam Goldman and Ned Tozun, both second-year Stanford MBAs and co-founders of startup D. Light Design, want to eliminate the use of kerosene lanterns in developing countries with a product called Forever-Bright. 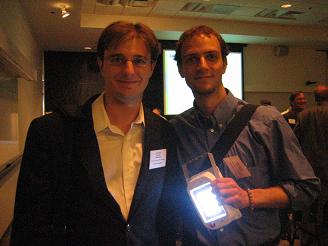 The product’s working prototype is a white box about half the size of a loaf of bread with bright LEDs for interior home lighting and hookups to charge cell phones and power radios. The device can be charged with solar photovoltaic cells, or, for villagers capable of traveling to grid-connected power sources, they can charge the device and bring it back to their homes.

Goldman (right in picture above) says one quarter of the world’s population, or about two billion people, rely on kerosene lanterns for interior home lighting at night. With most of these people subsisting on average incomes of about one dollar a day, they’re paying up to 15 percent of their income on kerosene, not to mention exposing their families to toxic pollutants and the risk of fire.

Goldman tells VentureBeat Forever-Bright’s manufacturing cost is low enough to retail the product for as little as $10 a unit and still generate a profit for the company. The young startup is seeking patents for its proprietary circuitry.

We first mentioned these guys in December, when we heard Ned Tozun (left in picture) pitch at Stanford, and he won the pitching competition. At the time, comments on that story pointed out competitors, such as Mightylight. Mightylight’s LEDs (see story in Time) sell for $50, so are more expensive than D. Light’s planned price. We’ll have to wait to see whether D. Light delivers.

Indeed, D. Light Design is one of a growing number of startups to attempt to leverage Silicon Valley technology know-how to eliminate kerosene usage in developing countries via alternative power generation sources. Back in April, VentureBeat covered another interesting startup, Potenco, which offers a yo-yo-like device that generates storable power with the pull of a string.

Installing residential solar power systems is too expensive, says Meredith McClintock, CEO of Petaluma-based ReadySolar, and her small startup wants to change that.

Solar power, installed, currently costs around $10/watt. Approximately half of that expense is related to the cost of professional installation, says McClintock.

ReadySolar believes it can eliminate 30 to 50 percent of the installed cost with its Solar-in-a-Box systems, which come prepackaged and, the company claims, install more easily and cheaply than competing systems from big photovoltaic (PV) installers such as Akeena Systems or Solar City.

Following in the footsteps of Henry Ford, who believed consumers should be able to purchase their Model Ts in any color as long as that color was black, McClintock believes that she can mass-produce a one-size-fits-all solar panel that is so easy to buy and install that consumers won’t need expensive solar integrators.

ReadySolar has its work cut out for it, however. The company’s easy-to-install modules must still be installed by a contractor, which, while not as pricey as the specialist PV installers, is still expensive. And the PV specialist integrators are also working to drive down their installation costs. Publicly traded Akeena has been telling its investors for several quarters that it is developing proprietary solar power installation technology that will allow it to significantly reduce its customers’ overall cost of installed solar power.

New technology from ReadySolar and others that promise to cut installation costs will let PV solar get closer to achieving grid parity — the holy grail where cost of PV-generated electricity is the same or less than grid-supplied electricity.

ReadySolar hopes to close a $3.5 million funding round from venture capitalists and strategic partners within the next three months, CEO McKlintock tells VentureBeat. The company has been funded to date with $350,000 in seed financing from angels such as Gary Kremen (founder of Match.com) and Peng Ong (founder of Interwoven), plus $140,000 in debt financing. 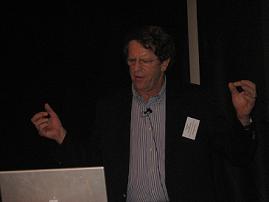 Instead, his company is developing photovoltaic solar that integrates directly into the roofing shingles.
Like ReadySolar, Redwood Renewables is aiming to deliver its products for $5/watt, installed.

If you believe Faust’s vision, one day your roof’s shingles will power your home and your electric plug-in car.

Faust says his shingles are made by laminating solar cells directly onto a recycled polymer substrate. The lamination, he says, adds strength and enables 30-year durability. He says his manufacturing process yields integrated solar roofing that is signifantly less costly than not just solar panels, but other roofing-integrated competitors as well.

The company says it has received two patents for its technology and has another patent pending.

Faust claims to have received a $20 million purchase order from a roofing wholesaler, though he declined to name the firm or the details of the agreement. He also declined to provide an exact ship date for his product. So this falls into that increasingly large category of companies that are promising new, cool solar technology, but where caution is merited because many so far have delayed or otherwise failed to deliver. We say this also because Faust struck VentureBeat as an eccentric character, obviously passionate about his product’s ability to change the world, but frustratingly evasive and inarticulate on many questions.

Faust says he’s looking for venture capital, but would not confirm the amount is company is seeking. Documents provided by the company indicate that the company has received total funding to date of $1.4 million from a syndicate of 12 private investors.