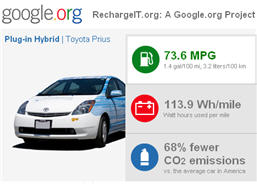 Google announced today financial support for the adoption of hybrid vehicles that can be plugged in to an electric grid for recharging (see full announcement).

Its philanthropy arm, Google.org, oversees the program, which is called RechargeIT initiative. It has awarded $1 million in grants and is offering $10 million for ideas about how to fund development and adoption of plug-ins, fully electric cars and cars that are equipped to actually return stored energy to the electrical grid, so-called “vehicle-to-grid,” or V2G technology. See the NYT story here. The company hooked up with PG&E and provided demos of the cars.

— Brookings Institution : $200,000 to support a spring 2008 conference on federal policy to promote plug-ins;

— Rocky Mountain Institute (RMI) : $200,000 to enable RMI to launch the design of a practical plug-in hybrid electric vehicle, with additional support and collaboration by Alcoa, Johnson Controls, and the Turner Foundation;

— Plug-In Data Project: To demonstrate the potential of this new technology, Google has partnered with A123Systems/Hymotion to convert a small fleet of hybrid cars into plug-ins and published preliminary performance data at . The experimental fleet of plug-in Prius models has averaged 74mpg to date, compared with 41mpg for the test fleet of non-plug-in Prius hybrids.