Friendster, the early social network that stumbled badly three years ago and gave up leadership status to MySpace, Facebook and others, continues to recover — and its 40 percent page view boost last month is remarkable.

The site had 24.7 million unique users last month, according to the latest Comscore data for global traffic just released. It lags behind leaders such as MySpace and Facebook (see chart below), but it is holding its own among the large pack of second-tier social networks of size, including Bebo and Piczo, as it grows in places like Malaysia and the Philippines.

The site’s page views, though, grew to 9 billion, a whopping 41 percent in May compared to April. At first glance, this suggests some mistake, or worse, a scam. We talked with David Jones, vice president of marketing, and he said the boost was coming in a number of ways, but assured us they are legitimate. The site has made a number of changes over the past two months. The biggest is that it has finally managed to fix the technology that had slowed its growth in 2004: Its “graph server” allows it to see how you are linked to your friends through three degrees (allows you to control relationships with your friends, their friends’ friends, etc.). The graph plagued Friendster at first by creating too many variables to track. It has been fixed to be able to manage four quadrillion possible configurations.

Aside from that, Friendster is driving page views in other ways. Just as on Facebook, when your friends change their status, such as add a friend, that information gets updated on your profile. The system also defaults to sending you an email with those changes weekly — prompting you to click through to Friendster, and creating still more page views. It has added a classmate function, to track people you may have gone to school with. It has added a classifieds section. When you sign up with Friendster, it will prompt you to add your contacts from your address books, and tell you who is not already in Friendster and prompt you to invite them. This, of course, drives still more page views as those friends click into to see your invite. And yet, while many of these features drive up page views, and may seem artificial, they have become pretty standard at other sites.

The company is still not profitable, but is poised to be soon, Jones said. 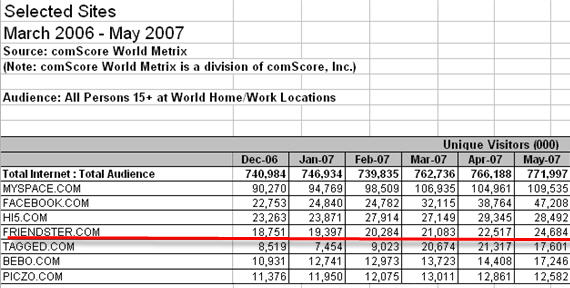