Slide.com claims to be the largest widget-maker in the world, reaching over 117 million unique viewers every month, according to Comscore.

It lets people make slideshows of their photos and embed them in the form of “widgets” into Myspace and other social networks. But widgets have been getting criticized lately for, among other issues, not having a clear business model.

Slide also has some of the most popular applications on Facebook’s platform. Top Friends, a simple box in a user profile that shows, well, one’s top friends, has nearly 7 million users — the most of any Facebook application. Fortune Cookie, which provides users with fortunes about themselves, has nearly 4 million users.

Facebook’s platform promises a more viral way for developers to gain large audiences of Facebook users quickly, by allowing them to build applications within Facebook, although lately there has been speculation that Facebook and its platform will not deliver the expected revenue and connections with users.

We decided to get Slide’s side of the story by sitting down with company CEO Max Levchin, a veteran entrepreneur who previously co-founded online payment service PayPal.

VentureBeat: What is the vision for Slide? You offer numerous embeddable widgets, some having slideshow and others having little to do with slideshows.

Max Levchin: Think of Slide as a giant media network for people to transmit information. The content that’s in there now has been provided by users — it’s whatever they want it to be. So, as the information glut becomes more and more of an issue, you need a means of filtering before you choose what information to consume. One of the things we did at PayPal was collaborative filtering and machine learning: looking at patterns of human behavior. We used it there to predict when people would try to cheat the system to get money. But you can predict pretty much any behavior with a certain amount of accuracy. Through [Slide’s] widgets, we’re learning about human behavior very broadly. We’re trying to predict what people will like…

…like a way to predict what kind of movies a user would like that are coming out in theaters. In that case, then you can show the user previews and reviews. Connect the widget with a ticket-purchasing service like Fandango through an API. Hook into a user’s account on a movie-rental site like Netflix — but have these things happen within the widget.

VB: If you’re learning so much about users, how are you going to keep them comfortable with using your services? Google’s facing a backlash from delving so deep into people’s personal information.

ML: We don’t know that much about them right now and it will take years to get a really good model. The bigger moral contract issue is this. The information they have in Slide is what they really love and care about — they’re putting their own pictures out there. So, if we’re telling them that there’s more to do with this thing [like renting a movie], it had better be really good for the user. The jumping-off-the-cliff-and-hoping-you-have-wings part is when we start to provide these additional recommendations.

VB: How will you make money? You can put advertising on Slide.com but its not easy to do with widgets, right? MySpace has banned it, but Facebook may be easier.

ML: I think it’s a little early to tell because we’re literally right now in the experimentation phase. One of the things we don’t want to do is to cheapen the experience of the product at every level. If you look at some sites, there are ads that obscure the tools to create the content. For example, if you look at the flow where a user creates the widget and posts it — you can put ads in there, but that will interfere with some number of people completing the process, hurting the spread of the network.

So what can you do to monetize once you have a network of information? Start slapping ads onto it? But if users don’t like it, they can switch to any rival widget-maker that doesn’t have ads.

Another way to do it is to try to drive traffic back to a site. That’s what YouTube did, for example. They had a huge distribution of widgets, going back into YouTube.com. That’s a very successful model, but the more cutting-edge version? The widgets are a window into a completely programmable world. Instead of making the users click and go back to Slide.com, which they may not want to do, you give them something more interesting. Something more programmable and dynamic than the web page they’re on.

VB: Your cofounder at PayPal, Peter Thiel, was one of the first investors in Facebook, and Slide has received funding from Thiel’s Founder’s Fund. Can you describe your relationship with Facebook, the company, and Facebook, the platform?

ML: Silicon Valley is pretty tiny and I don’t think we enjoy any special status. I actually think Facebook made it their business to be close with all of the app developers. They couldn’t have done more. They’ve released this API, they’ve had this huge publicity. They really wanted to invite developers to come in. It’s reminiscent of Microsoft’s early efforts to work with other companies.

VB: So where do you see Facebook going with its platform, in general?

Right now, nearly all the apps on Facebook take a week to build. No more. The exceptions are iLike and Flixter: serious apps with multiple functionalities. Everyone else is jumping and saying “hey, if I build Magic 8 Ball, will that take off?” Sure enough, it does. I think there are seven different versions of Tetris.

But go back to the early 80’s, when computer games were just becoming programmable for people who could build shareware. The first game was Pacman, then Tetris, then Doom, then Quake 3, then World of Warcraft — it starts out simple then gets more complex. Somebody will build World of Warcraft on Facebook Platform. Probably Blizzard, for all I know. But that’s going to take more than a month. So the next half a year, you’ll see very major apps, because the distribution is very powerful. You can try to go get your own users and do all that work, or you can build an app on Facebook and suddenly it’s all there. Facebook, in a big way, is the new internet.

Monetization is a big question. The CPM on a typical app’s Facebook page can’t be all that high because [the app isn’t running ads on the user’s] profile page and because any other Facebook page is just a click away. It can’t be more than a dollar, probably less than half a dollar. We [Slide] don’t know yet because we haven’t tried it, but it’s probably already going on. If that’s the floor, how do you raise the ceiling? Some apps will start charging, and Facebook will have to provide a transactional platform where a user can say “yes, I want to buy this” and Facebook takes care of the transaction. Which will be phenomenal for Facebook because they can just extract a tax for the process.

The other thing that could possibly happen is that people say “well, I don’t know how to monetize Facebook but I know how to monetize my site, JoeBob.com. So I’m going to create this weave where people start on Facebook” and they slowly go off [to JoeBob.com]. This is the question that Facebook will have to answer: are they okay with that?

VB: When Platform launched last year, it allowed other sites to connect to Facebook’s servers to provide users’ “social context” — profile, friends, groups, events, photos, etc…. Slide, for example, allowed users to make slideshows out of their Facebook photo albums on Slide.com. Where does this fit in now that the focus is on Facebook-based applications?

ML: Exactly, I think that’s what Platform is set up for. The communication pathways are in Facebook’s control and the API extends beyond Facebook itself — they already have. If you look at the API carefully enough, there are provisions for web apps and desktop apps. Developers haven’t been building very many because it’s too early: they haven’t had time to build a really great off-Facebook app.

I bet there’s going to be a major multi-player game that’s going to be built and launched on Facebook. It will have a much broader format: maybe on the desktop, maybe on a web site. It won’t really be part of Facebook, it will just use Facebook as the primary communications channel. Players won’t even need to know that they’re communicating through Facebook. A message will go from one person to another, and it will actually go through Facebook’s servers because of their great spam protection, scalability, backups and all that stuff. [Facebook’s platform] is potentially quite a coup on the internet.

I think it’s fascinating to think about Facebook becoming the means for people to connect and communicate on other destination sites. A utility, a plumbing line. Right now, on many sites there will be a button that says “contact admin” with an email-to link. There’s no reason there can’t be a link that’s “contact me on Facebook,” which would send a message to that person’s Facebook account. This would drive traffic back to Facebook. That’s really why it’s a good deal for a person to switch to using Facebook [as their email inbox]. There’s very little spamming is going on there because Facebook is in control. More importantly, the reason spamming exists is because email is distributed: the SMTP protocol was designed a long time ago, to not be vulnerable to a centralized attack. A centralized attack is less likely on Facebook because they have data centers and lots of backups. Email wasn’t really built with authentication in mind, but Facebook is all about authentication and centralized control. They can catch spam before it gets to anybody’s mailbox because they’re in charge of delivering the content.

It’s not clear to me that lots of other people won’t say: “Oh great, I want a piece of that, too.” There are some people with huge distributions that can move on that. But I think Facebook has the best technological chops and clarity of version to go there.

It doesn’t quite work that way because applications won’t stay the same. They’ll keep on adding new features so there will be more things to do, more reasons for people to go back to app’s pages. And Facebook will keep changing the API, either for additional excitement or to curtail the abuse, so we’ll find out exactly where that goes.

It’s at least worth some fraction of the money that Microsoft is paying Facebook for banner ads. Microsoft decided that the Facebook user base, by the year 2011, is worth advertising to for this much money. I think once again, that’s a floor. Advertising is both the most successful and easiest to understand, but also least user-touching — obviously, transactional monetization is more powerful because it’s not as sensitive to economic changes. People still need to buy stuff. Which is where a Facebook tax could come in [for Facebook apps].

ML: I think they are. At 28 million, they’re getting to be as big as the population of California. They’re getting to be the size of a large state, and they’re much larger than most municipalities. So they’re kind of a city government — and goverments can be benevolent, provide utilities and tax people. I suspect that that’s how they think of themselves. Or at least the governance of Facebook is a very important thing to them at this point given the growth of the applications. 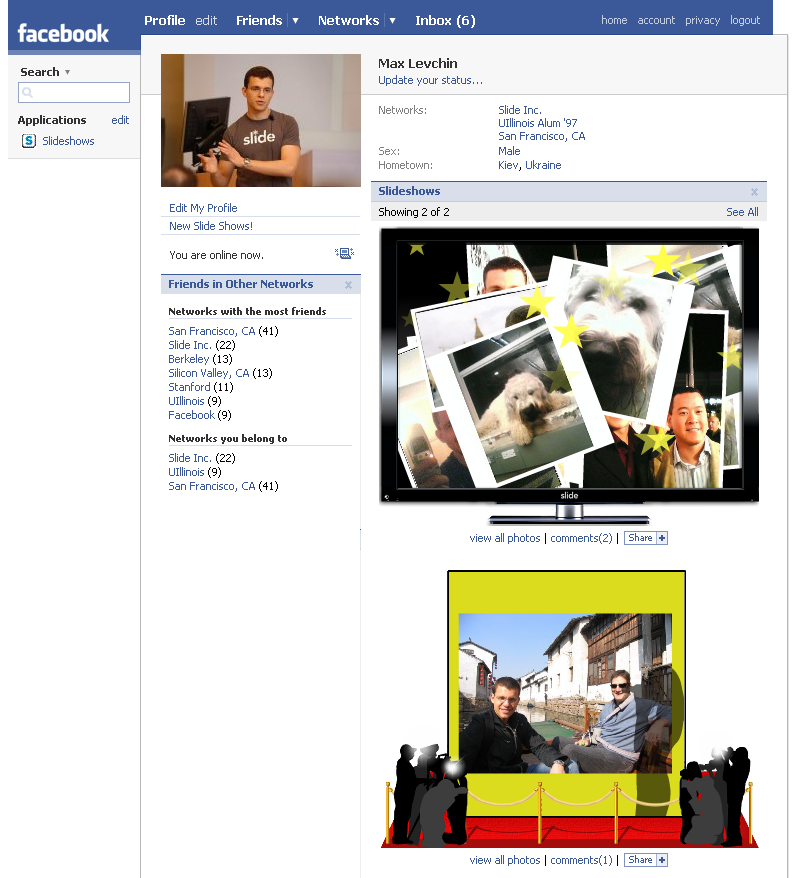