Ooma, a Palo Alto company, is letting you make free land-line phone calls to anyone in the United States.

It hopes to let people share their phone lines with each other to bypass having to use a major telecom companies.

Here’s how it works: You install an Ooma “hub” device, costing a $399 one-time fee, in your home. This routes phone calls through your computer or your land-line. Ooma’s device also sends and receives calls for other people in your geographic area — those using local land lines that Ooma exploits with proprietary technology. You do need a broadband internet connection.

(The first ten VentureBeat readers can get a free Ooma device, see below, courtesy of the company.)

The devices in each home help balance the load of calls coming across the Ooma network (Ooma uses an algorithm to do this balancing, so that everyone can share their excess phone lines with each other). The most similar comparison is to peer-to-peer (p2p) file-sharing systems like BitTorrent.

That’s because Ooma takes advantage of empty space in current land-based phone systems, according to chief executive Andrew Frame, a former Cisco employee who started his first company at 15.

By comparison, some households use Voice over Internet Protocal (VoIP) technology, such as Skype, to make calls over the internet using their computer and a voice-enabled headset. While VoIP is normally less expensive, many households maintain an existing land-line in case they need to make a 9-11 emergency call.

These lines are the ones Ooma uses to distribute incoming and outgoing calls between its users.

For what Ooma offers, the one-time cost of the device is a good deal. Competing VoIP technologies typically charge monthly fees; Vonage charges $25 per month, for example. The downside, of course, is that Ooma makes less money. It’s hard to see to how it will make recurring revenue. It also requires people to dole out a significant amount of dough for yet another telecommunications service, when they already have a broadband connection and a fixed line. On first blush, we see success for this company as a long shot. It requires people to install a system they’re not used to. 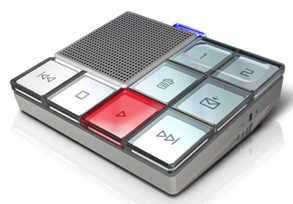 One way for it to make recurring revenue is if it manages to sell you multiple devices. Here, Ooma does let you add “scouts,” or secondary Ooma devices, costing $39, allowing you to connect phones in different parts of a house. International calls via Ooma will incur a fee comparable to Skype, Frame told us. You can’t do this with Vonage.

The company says it is developing additional features to help it connect different phones with a single number. This way, we’d be able to use the service to take cell phone calls while at home. This would make it similar to a service like Grand Central, which distributes calls across lines based on a single, central phone number.

From the demo version we saw it’s easy to use, and the device itself looks like it comes from the 1980s sci-fi movie, Tron.

Email venturebeat@ooma.com — if you’re one of the first ten people, you’ll receive a free one. Otherwise, Ooma is in a private beta, invite only.

Ooma also boasts an illustrious group of investors and advisers, including Ashton Kutcher from Hollywood and Sean Parker from Napster, Plaxo, Facebook and The Founders’ Fund. We reported about the company earlier, here. It has raised a total of $27 million.