Jaxtr, a way to bypass international calling fees using your phone, has gained over 500,000 registered users since it launched last December.

It is one of a group of fast growing companies that make Internet calls in a similar way. Jajah, another company that started earlier, and has more that 1 million. Rebtel is another player. Unlike these newbies, EBay’s Skype, a bigger, and more mature company, requires you to wear a headset to make calls.

Jaxtr, located in Menlo Park, Calif., says it has been doubling its number of registered users every month since March, when it began its public beta. An average of 10,000 members now joining per day.

When we reviewed the site in December, we noted how it did two things well — that now appear to be driving this growth.

One is that it lets you put a widget on any blog or site that people can use to put an internet-based call through to your phone, without giving out your number. You’ll only be charged for your local rates, per whatever plan you have for the land line or mobile line that you’re using. A caller types in their number, receives a call from Jaxtr then is put on hold while the system calls you. The other is that you get a single profile URL that people can reach you on even if you change phone numbers: You can put this in your email signature or other obvious location instead of a list of home, cell and office numbers.

Other features compliment the service, including a web-based voicemail system and email notification about voicemail.

The first 100 minutes per month are free — after that, calls go straight to voicemail and you pay to upgrade.

There are plenty of Internet-based calling services out there, but chief executive Konstantin Guericke says Jaxtr gets rid of the inconvenience of headsets and software download (Skype) and the need to go the web to make calls (Jajah).

Jaxtr currently has local land-lines set up to handle the service in 52 countries and is doing well in major markets: 50 percent of all of its users live in the U.S., India and China. Apparently, it’s capturing the social-networking demographics, as some 70 percent of all Jaxtr users are in their 20s. 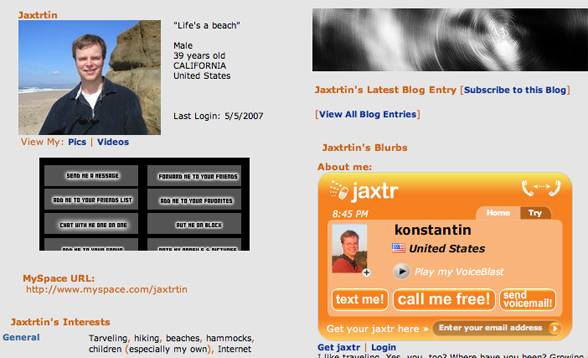