If you had a minute to speak with someone over a live video connection, could you decide whether you would date them? That’s the question for WooMe, a startup aiming to bring the world of speed dating online.

It launches a testing version today, but will open for all in a couple of months.

Unlike most other dating sites, users don’t have to answer dozens of questions or fill out an application form. Nor will they be forced to go through the grueling process of reading other user’s rambling essays.

Instead, speed dating sessions with up to 16 participants, eight of each sex, will be the way WooMe users gauge their interest. The sessions are intended to run in live audio-video, although only audio can be selected; participants never type to one another, although they can classify them with tags for future reference. The founders say hearing a prospective date’s voice is far more revealing than often realized.

No other dating startup we know of has based their company on speed dating. WooMe’s gamble is based partly on the lack of speed dating online, partly on the failure of other models of online dating, despite the sizable rewards awaiting successful companies. (The company says the market could reach $10 billion, but that’s clearly a stretch). 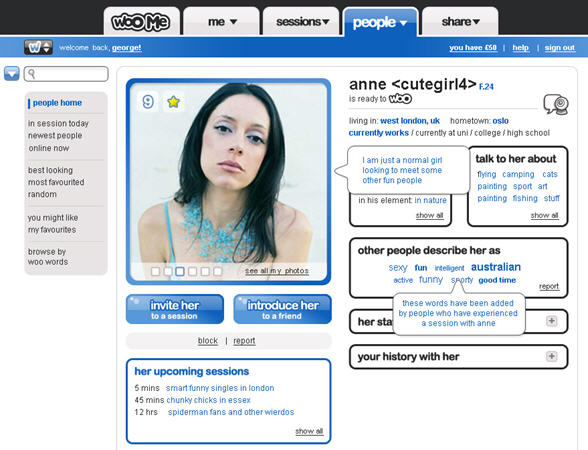 The years since the dotcom bust have seen dozens of dating startups appear and disappear; Match.com, once considered a thriving dating community, lacks hipness. Some sites like eHarmony, typically catering to older individuals, are somewhat successful. But no company has yet claimed the holy grail: Online dating that everyone uses.

On the other hand, this technology isn’t particularly defensible. There’s nothing stopping a more popular brand (Match.com) from duplicating it; except, that is, economics.

WooMe is dirt cheap. After a conversation, a guy (more often) can say that he likes a girl. If the girl says she likes him too, the guy can pay $1 to get the girl’s contact details. There’s no way Match.com will want to match this low price.

The site is not monetizing through ads, another refreshing difference from some of the more recent dating sites.

Like another recent startup, iminlikewithyou, WooMe aims to satisfy the short attention span of the younger generation. The focus is on fun, fast interactions. Unlike iminlikewithyou, WooMe thinks its service can result in real dates for its members, because it will give a much better view of who the other person really is, despite the speed of sessions. 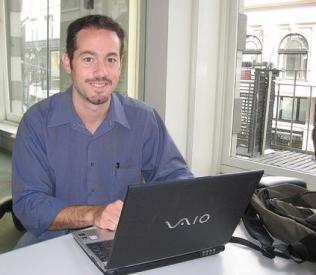 As a demo of his service, WooMe CEO Stephen Stokols showed me how users could start speed-dating sessions based on themes of their own devising; his example was called “The Faces of TechCrunch.” WooMe is present at the TechCrunch40 conference today, undergoing their alpha launch for an initial user base of 1000.

Facebook users can invite each other to Woome sessions.

One problem haunting dating sites, and which may also challenge this one: Not enough desirable women, and a glut of socially challenged men.

The WooMe team believes that their service will provide just enough depth of interaction to help desirable women (and, to be fair, men) quickly weed out the people they don’t want. The hosts of sessions will also be able to be selective as to who enters.

The platform offers possibilities beyond dating, as well. Sokols mentioned interviews for jobs or potential roommates as good uses for WooMe.

WooMe has taken on $1.9 million in funding from investors including Joost founder Niklas Zennström, through his Atomico investment fund. 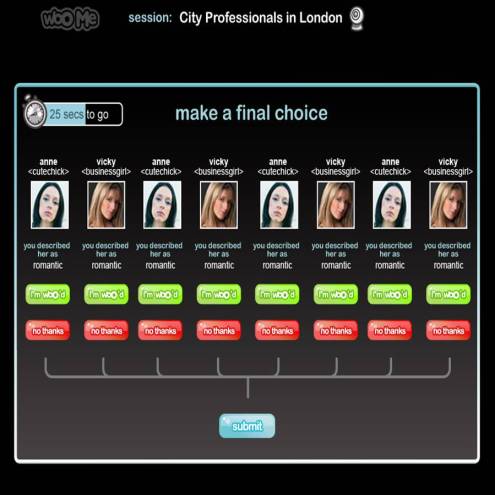