With all the video content online, the video advertising market is booming. Investors are still placing bets on new companies, and existing companies are getting more aggressive with ad techniques.

A second company, Blinkx, is already public, but its latest video ad product is controversial: It lets anyone with embedded video on their blogs place contextually relevant text ads inside them even if the videos aren’t ours. To test it, we pulled a YouTube video about Halloween made by One True Media, for example, and inserted ads on to it. We could make money on it by showing it VentureBeat, if we wanted. See image below. Note it gives you the option of showing the ads inside or outside of the video. Details here. 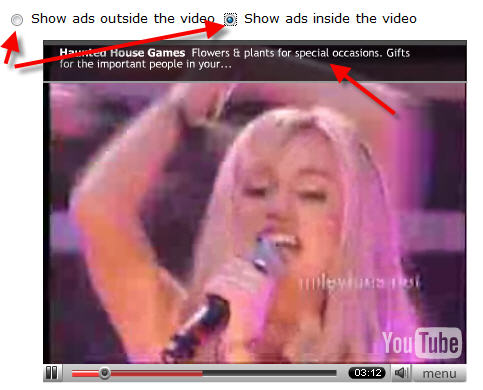 A company named Revlayer had done something similar a few months ago, but disappeared a day after launching. However, it was more obtrusive, placing an entire banner over a video before it started, and wasn’t necessarily contextually related. It’s site is still down, as of this writing.
While the market is expected to become quite large, rising from around $775 million this year to $3.11 billion by 2010, there is no shortage of competition for new companies like YuMe.

Redwood City, Calif.’s YuMe is interesting because its technology works across multiple platforms: It can serve ads into downloaded video and video streamed on websites and mobile phones. This is in contrast to companies like Kiptronic, which focuses on downloaded video, or AdMob, which does only mobile.

YuMe’s chief executive and founder, Jayant Kadambi, says his company aims to place ads in videos from the “mid-tail” of online video, which he defines as “anyone that is not an NBC or CBS.” These include customers like Somagirls.tv, JoeCartoon.com, RedOrbit, Vuze and Pando — medium-size, professional producers and distributors whose content is safe for brand-conscious advertisers. In this mid-tail, the company currently serves between 150-250 million ads a month.

Jayant says that he raised the round mostly to scale YuMe’s infrastructure, recruit top notch executives, and build a sales force. The company previously raised $7 million.