Dash Navigation opens platform — Dash, you’ll recall is the cool GPS device that you can use in your car, and which will be constantly connected to the Internet. The company orginally said it was going to release its product this fall. However, last month, it delayed the release and will come next year. Notably, at the Web 2.0 Summit today, it also declared it will be an open platform. So you can do mashups with maps, and use Zillow, for example, to track the values of homes as you drive by them. That’s a good turn, because earlier year we criticized the company for being closed. That’s when it signed an exclusive contract with Yahoo to offer people search. What’s the point of letting people use the Web from their car if you’re going to shut them out from using other services? We still think this company is somewhat hyped. Accessing a decent, reliable Internet connection from your car is going to be a very difficult thing to do, and there’s loads of competition out there. As mobile internet access gets more robust, however, this device will get more attractive. 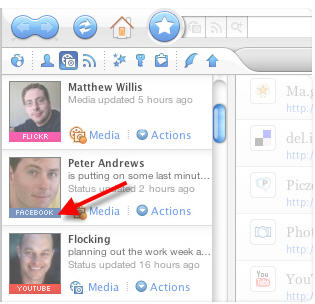 Flock offers new version of its broswer to the public here — We’ve written about its sidebar, which lets you operate within some of your social networking accounts without actully going to their site. New is the ability to access your Facebook account, and do upload photos directly to that account from your browser (see image).
Sports: Patriots successfully sue StubHub to gain ticket resellers’ identities — Stubhub, a marketplace that lets people buy and sold tickets they have purchased for sports games, concerts, and other events, was forced to divulge the identity of 13,000 of its users to the team. The Patriots claimed reselling tickets violated a Massachussets state law against reselling tickets for over two dollars the price at which they were purchased. EBay-owned Stubhub has begun notifying its affected users that the Patriots have their names, addresses and phone numbers. The Patriots management says it may revoke the tickets of people who resold on Stubhub. The Boston Globe has more. The team is now spying on its fans, after having been busted for spying on its opponents, as others have noted.

Funky macro economics — We’re not certain how this will affect start-ups, but the dollar is an all-time low, at $1.42 to the euro, and the price of crude oil also hit a record, briefly breaching $90 a barrel yesterday. This could mean inflation, but housing woes are keeping things in check. (Details here).

Comcast steps away from Net Neutrality — Web companies like Joost and BitTorrent that have business models based on peer-to-peer sharing rely on the concept of “net neutrality,” meaning all traffic on the internet will be treated the same. Net neutrality isn’t a law, though; internet service providers can manipulate traffic in other ways if they wish. Comcast, the nation’s second largest internet service provider, has now been shown to be selectively blocking some peer-to-peer traffic, with no regard to the source of the traffic — in other words, they don’t care whether it comes from illegal file sharing or a legitimate business, they just don’t want it.
It’s not time for P2P-based companies to panic just yet. Comcast was already notorious for heavy-handed tactics to limit their bandwidth, and the bad publicity may force them to drop the practice. On the other hand, if the company manages to set a precedent, Joost et al. could be in trouble. And to make matters worse, many customers can’t vote with their feet by leaving Comcast — in many areas, only one or two service providers are available to choose from.

The tell-all essay of Brad Greenspan, Myspace “founder” — Greenspan played an early role at a company called eUniverse, which gave birth to MySpace. However, while he claims to have been a founder of MySpace, Myspace executives dismiss his role there. Greenspan writes in a long, unedited essay on the anti-Myspace site: I was forced to leave eUniverse at the end of October as [venture capital firm VantagePoint Venture Partners] took control of eUniverse and Myspace. His screed, complete with court documents, tells the story of how he was the driving force behind Myspace, and how a cast of characters took the company out from under him. Greenspan has already tried suing News Corp over his grievances, but his case was dismissed. See our previous coverage of the issue here. Found via YC hacker news.

Software giant Microsoft’s drag-and-drop Web mashup development tool, Popfly, now open for public testing — Its for people who don’t know how to code, and gives anybody the ability to build applications. As it becomes easier to mix and match programs, like building a house from Lego pieces, maybe the rest us will really start building applications. This may have limited popularity, but it won’t be a blockbuster.