[Updated with VentureOne/Ernst & Young data, which shows investing increased significantly during the quarter]

Venture capitalists invested robustly during the third quarter, at or near record levels since 2001, according to two surveys released last night.

So all is OK on the investing side, even if the venture capital firms themselves are showing signs of pain. Friday, news spread of yet another venture capital firm that has put its fund-raising plans on hold, because investors found its results too mediocre to justify reinvesting. The firm, Sequel Venture Partners, of Boulder, Colo, invests in health care and technology.

Venture capitalists invested $7.1 billion during the third quarter, comfortably above levels of the same quarter last year, but showing a slight drop off from $7.3 million or so pace set in the first two quarters of this year, according to data published by PricewaterhouseCoopers, the National Venture Capital Association and Thomson Financial.

This was followed by data from VentureOne and Ernst & Young, which shows a more robust investment picture. Venture capitalists invested $8.1 billion the third quarter, up from strongly from $7.5 billion in the second quarter, and $6.3 billion the same quarter a year ago, according that survey. It was the ninth straight quarterly increase, and the highest since 2001.

The quarter saw notable increases in both the clean-tech and internet companies.

Software and life sciences remain the most heavily funded sectors, with $1.11 billion and $1.9 billion, respectively, according to the NVCA/PwC/Thomson survey. Clean-tech, however continues to draw more interest, with $844 million in investment, or an 80 percent increase compared to the second quarter of the year. Three of the top five deals this quarter were in clean-tech.

The whopper was GreatPoint Energy, of Cambridge, Mass, which raised $100 million — one of the largest deals ever for the sector. It converts coal and biogass into clean natural gas (see our coverage of the deal, announced last month), and is backed big-name investors Kleiner Perkins, Khosla Ventures and Draper Fisher Jurvetson. The only company raising more than GreatPoint was Globus Medical, which raised $110 million.

Looking more closely at the NVCA/PwC/Thomson survey, here’s a full list of the top deals for the first quarter: Download Excel file.

Silicon Valley had the most deals, as usual. For a full list of all of the Silicon Valley company fundings, by company, investors, amounts, sector, location, and stage, see this detailed file (downloads Excel). Here’s a slide show of national trends (downloads pdf), and the detailed numbers are here (Excel file).

The year is still on pace to be the biggest year for venture investments since 2001.

The dollar value of first time deals (companies receiving venture capital for the first time) was $ 1.7 billion, which remains high compared to last year. However, seed deals in the third quarter fell 15 percent to $1.4 billion compared to the second quarter. 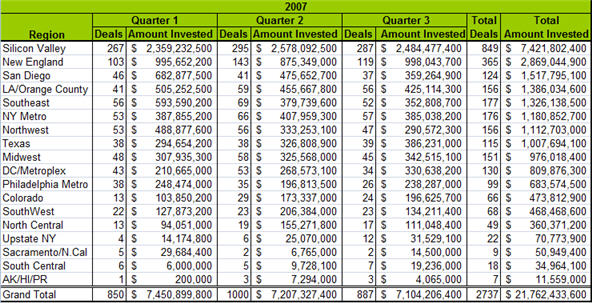 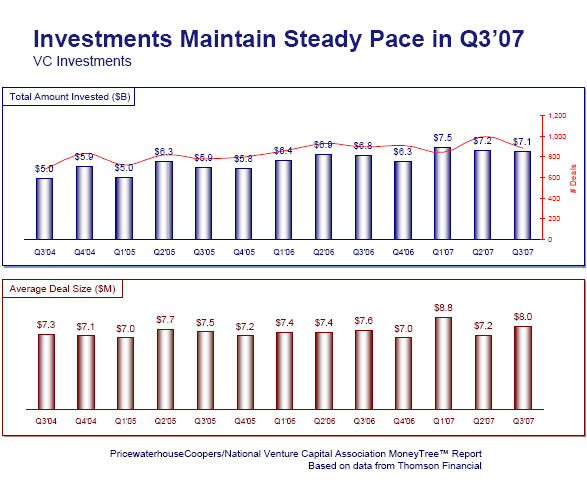