Social marketing is generally a matter of attracting like-minded people and aiming advertising at them. Getting at disparate and often amorphous groups who nevertheless still have something in common is quite a bit trickier, though — which explains the genesis of Disaboom.com, a new social-networking/marketing site aimed at bringing together people with disabilities, a group every bit as diverse as the general U.S. population.

(For a less ambitious, but perhaps more feasible, attempt to harness social networking on behalf of people with disabilities, see our discussion of Enurgi below.)

The site, featured in this NYT article yesterday, aims to draw together people from all socioeconomic backgrounds who happen to have some form of physical or mental disability. Although associations for people with disabilities exist, they have tended to attract only a tiny fraction of the 50 million Americans that the NYT says make up the “disability community.”

Disaboom, based in Lone Tree, Colo., has set some ambitious goals. The company wants to attract more than one million unique visitors each month by February, despite the fact that it just officially launched its site a month ago, and then plans to double that again over the coming year. Admittedly, it’s already attracted some serious backing: Its early advertisers include Netflix, J&J and Avis. (The NYT also lists Cricket Communications, a prepaid cellular-service company with really spotty coverage.)

(Oddly enough, Disaboom is also a public company, having offered its stock back in April — see its SEC filings here. Disaboom, however, didn’t raise any funds in the offering, which instead appears to have served entirely as a way for existing shareholders to unload their holdings onto public investors. Those shareholders sold 6.3 million shares at a price of 50 cents apiece; according to the company’s SB-2 filing with the SEC, those individuals had mostly just purchased their shares a month earlier in a private placement. The company currently has a market capitalization of $41 million.)

As for the site itself, Disaboom offers what looks to be a varied array of resources for people with disabilities, such as basic health information, lifestyle articles, a video-sharing section, chat rooms, online forums and the like. A month in, however, members still appear to be a bit few and far between — the classified section lists only nine items for sale (and zero events, auto sales, medical equipment, real estate, miscellaneous or free/trade items), only 12 members were online when I checked in a little while ago, and the chat room isn’t exactly in full swing. As for the forum — well, the statistics can speak for themselves (I’ve included some representative advertisers as well): 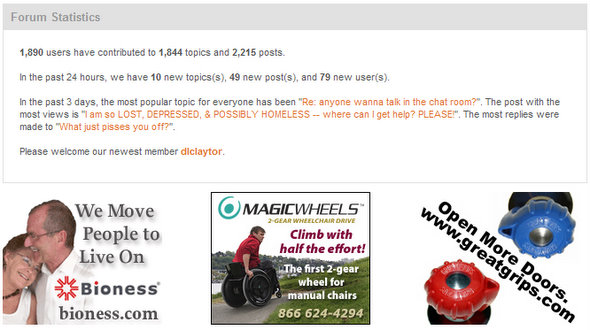 That’s a long way from a million visitors a month, even when you consider that only a fraction of any site’s visitors are actually going to participate in a forum like this one. Meanwhile, the social-networking aspect of the site seems to still be in its infancy; I signed up for an account and, once in, my only choices consisted of editing my bio, writing or editing an onsite blog, and managing my “favorites,” which turns out to be what other sites would consider “friends.” But finding other people to friend — sorry, to “favorite” — looks fairly awkward, as the only way to pick individuals out of the crowd appears to involve reading their blog posts or visiting the forum.

In other words, Facebook has relatively little to worry about here. It was also striking to me that in a half-hour or so of surfing through the site, I only came across one ad from a major advertiser — an Avis spot tucked away on an inside page about cerebral palsy. For the most part, the ads mostly appeared to pitch specialty products for those with disabilities, such as wheelchairs, rehabilitative services and easy-opening grips for doorknobs, not mass-market products.

So Disaboom, while clearly well-meaning, comes up a bit short. That might not just be an execution problem, either, since the site depends upon the notion that people with disabilities really want to think of themselves as a single community in the first place. Outside of political movements such as those that produced the Americans with Disabilities Act, that appears to be an unproven, if not largely untested, idea. In which case Disaboom may have a tougher road to travel than it first appeared.

By contrast, the startup Enurgi aims squarely at a primary need of the elderly or those with significant disabilities — finding professional caregivers. Essentially, caregivers — who must supply proof of their licenses — and those in need of care register and establish profiles, then begin searching for one another. Enurgi plans to track these relationships, schedule sessions and manage payments, even offering tools that can, for instance, determine how much service existing insurance will cover. The company envisions charging a fraction of all transactions that move through the site. It may not be anywhere near as ambitious as Disaboom, but since it addresses an existing and pressing need, it may find moving forward a whole lot simpler. (Hat tip: Techcrunch.)