These days, it’s easy to shout “bubble” in the crowded theater of online video startups. Only YouTube has been a runaway success — but even YouTube hasn’t proven it can make money. Yet online video sites continue to raise millions of dollars in funding.

Blowtorch, a California company that has just launched with $50 million in funding, joins the crowded field. But it has a new twist at least: It will produce films based on ideas proposed by users and voted on by others. Users will be able to vote on casting, music, wardrobes and other aspects of each film.

In other words, group-created movies. Call it Hollywood 2.0. It will offer feature-length films, professional-quality short films, along with a social network and a mobile site.

The funding will be used to produce and market eighteen feature-length movies over the next three years.

Sony-owned Crackle does something similar: It produces videos from the ideas of its audience members. A sort of minor league for Hollywood. As we reported in September, the plan is already resulting in a traffic surge and millions in advertising revenue. 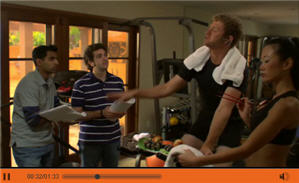 Blowtorch’s vision is more grand: It’s goal is to produce low-budget hits like Napoleon Dynamite, a movie that cost $5 million to make, then made $17 million at the box office and $90 million in video rentals and sales, according to chief executive Kelly Rodriques. He wants people to say “I helped pick the cast” when they watch a Blowtorch movie.

This is exact opposite of the rigid artistic control maintained by a genius Hollywood director, say Stanley Kubrick or Francis Ford Coppola.

Part of its plan is hold live events, such as movie nights on Thursdays, Fridays and Saturdays at more than 600 movie theaters across the country — and focus on inviting students at colleges and universities. During these movie nights, users’ short films will run before feature films and audiences will be able to vote for their favorites on company’s social network, through the web or mobile devices.

The full plan won’t be in place until next year. Right now, the company is running a user-generated short-video contest on its site where the best video creators will get paid, go to LA, and get team of pros to re-shoot. It is still working out the details of how users will be paid for their work, once the rest of the plan is implemented.

The company will spend a significant amount of money advertising its movie nights and its site to college students.

Feature films won’t necessarily bubble up from Blowtorch’s audiences. It says it will produce some on its own, or acquire the rights to others. For starters, it will juice its efforts with a feature film called “You Are Here,” which will debut in theaters in spring 2008. The movie is being produced by veteran filmmaker and Blowtorch board member and advisor Paul Schiff. It will be directed by Henry Pincus, and features a cast that includes Bijou Phillips from “Almost Famous”, Danny Masterson from “That 70’s Show,” Michael Biehn of “Grindhouse” and “Terminator,” and Patrick Fleuger.

The company was conceived a year ago and has been funded for the last six months. The team comes from various media and advertising backgrounds. For example, Rodriques helped found the interactive marketing group at Ogilvy and Mather and was the chief executive interactive media company Novo, now known as Arc Worldwide and part Publicis’ largest interactive unit. Rodriques was most recently the president and chief executive of Totality, a telecom services company bought by Verizon.

The company has offices in both Sausalito (on northern edge of San Francisco) and Los Angeles — in an effort to stay relevant to Silicon Valley and Hollywood. Its close relationships with Madison Avenue include an unnamed marketer that has agreed to partner with Blowtorch, hoping to get better access to the lucrative college demographic.

The company says it has combined different forms of financing, including from an unnamed hedge fund, but the only named investor is venture capital firm Ignition Partners.