LinkedIn has just launched its own developer platform and a new design that promises to make it more useful to its millions of business users.

Earlier this year, many wondered if social network Facebook would overtake LinkedIn as a business network destination. Many professionals have started to use Facebook for networking — enjoying its more social features.

LinkedIn’s new features now put it a step ahead of the competition. You’ll start finding connections to people on LinkedIn while you’re using other web sites, through third-party applications. You’ll see connections with friends from other social networks like Myspace and Hi5 show up in LinkedIn. On your page, you’ll get “modules” for third-party applications (more on that in a sec; they’re like Facebook applications) and a news aggregator, featuring articles about your industry. These are LinkedIn’s efforts to make you spend more time on the site each day. 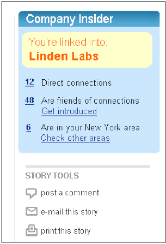 Business Week also has a LinkedIn feature, where you can send the article to your LinkedIn friends, so your contacts will see it the next time they log in to LinkedIn.

LinkedIn aggregates articles that are uploaded to give you a personalized news section of the LinkedIn site. You can see the most popular articles about your company, your partners and competitors as well as other news from your industry. 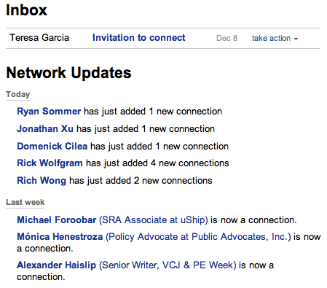 The Mountain View, Calif. company has also made sweeping design changes, timed with the platform launch. It has simplified its homepage, borrowing from the “feed” concept already seen on Facebook and more recently sites like contact manager Plaxo. You’ll now get a running list in LinkededIn of your contacts and their activities on the site. LinkedIn’s term for this is “Network Updates,” as opposed to Facebook’s “News Feeds.”

LinkedIn will also let you add what it called “modules,” or developer’s applications that appear in LinkedIn. This component was announced last month as part of the Google-led OpenSocial developer platform. OpenSocial is a still-early effort to let developers build such applications that work on a range of social networks — besides LinkedIn, OpenSocial partners include social networks like Myspace, Hi5 and Bebo, and business software giant Oracle. 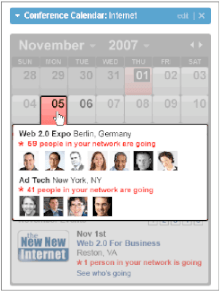 You can pick and choose modules, which will appear next to your feed. One example of a module is a calendar that appears in LinkedIn, that features upcoming events in your industry. The application automatically knows what industry you’re in, based on your LinkedIn profile. It lists other people who will be attending these conferences, and links to their profiles on other social networks so you can learn more about them.

To fit in with the rest of its improvements, LinkedIn has given its overgrown design a haircut. It has cut the number of buttons on the top menu of its homepage to five, from more than ten. They are People, Jobs, Answers, Services and Inbox.

In sum, LinkedIn is trying to cement itself as the center of business networking by creating a set of features that make its large database of business relations more valuable.

You can see this trend emerging by looking at the company’s user data. The average age is 41 and at least one executive-level person in every Fortune 500 company uses the service, LinkedIn tells us.

The company has more than 16 million registered users, and says it is now gaining more than one million new members per month.

Compare all of these developments with Facebook. As Facebook has opened up beyond college students to let anybody join, the recent graduates who joined the site in 2005 and 2006 have brought it into their workplaces. This has led to active Facebook users modifying how they move the site. For example, one friend of mine in the finance industry has modified her profile to remove the college era party pictures in order to appear more professional to her newly-joined coworkers.

Facebook has shown signs it wants to woo business people. For example, it is working on ways for you to divide your friends up into groups according to the type of relationship that you have with them. Then, you can decide which groups of people can see what information about you on the site.

But how significant are all these platforms? LinkedIn’s platform is the most interesting one to launch since Facebook first came out with its own platform, over a year ago. It is specifically focused on helping businesspeople communicate, as the company notes here.

Facebook’s platform — and now, LinkedIn’s — has two complementary components. On the one hand, they both let third parties build applications within the site. On the other hand, they let developers incorporate their social network data into their own sites.

With Facebook’s platform, we imagined developers building useful Facebook applications that used the site’s social data to let you find and work with people more easily.

The idea hasn’t resonated with developers. Only a handful of companies have experimented with it. The better known component of Facebook’s platform is its set of application programming interfaces that let developers build applications within the site. That launched in May, and has drawn more than 10,000 Facebook developers. However, the business models to support these applications are still unproven.

LinkedIn’s user base — and approach to networking — may pay off. The company won’t confirm any other platform partners, but it’s worth noting that Salesforce and Oracle are also OpenSocial members. With this platform, it’s easy to imagine LinkedIn data appearing within Salesforce and Oracle business software, along with these company creating modules that feature information from their software within LinkedIn. The result of this sort of integration: You’d automatically see valuable business connections as you’re working.

LinkedIn, of course, has also been in talks with News Corp about a possible purchase, from what we’ve heard. This platform effort signals that the company is not going to let such talks slow it down. 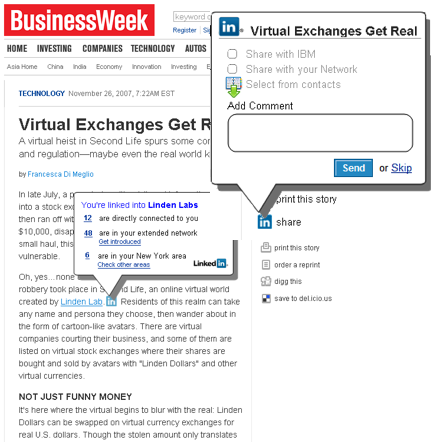