Web of Trust is a plug-in for your browser that lets you rate all websites based on their trustworthiness, reliability, privacy and child safety.

It is similar in some ways to the market leader, McAfee’s SiteAdvisor, though WOT relies on help from you and me to do the ratings, not on web robots. SiteAdvisor uses automated crawling to assess where a site’s links lead to, and other things such as available downloads.

The Web of Trust software, which you download from its site, supports IE and Firefox, and sends your ratings back to the company’s database so they can be viewed by others. So far 16 million websites have been ranked, the company says.

After downloading, whenever you use a major search engine, you’ll see an icon next to each of the search results colored red, yellow, or green to indicate the site’s reputation (again, very similar to SiteAdvisor). When browsing sites, you can rate them by clicking on the plug-in icon in the toolbar and selecting from the color-coded bars. You rate the sites in four categories mentioned above.

This only takes a few seconds but leaves me wondering what fraction of internet users will bother going through the process for every site they visit. CEO Esa Suurio says that, as in all communities, the minority does the majority of the work. Another company, RatePoint, tried relying on users to do something similar last year, but it has since changed its business model. Suurio says user-generated reviews of sites can be more effective. For example, he said one of China’s largest newspapers had a negative rating from SiteAdvisor because it contained a single link to another site that had security issues. WOT’s users decided the single link wasn’t enough to override the Chinese newspaper sites otherwise solid reputation, he said.

Aside from user input, WOT also tracks more than a hundred third-party listings of sites that have been classified as phishing related, and integrates these into its ratings.

The system uses statistical algorithms to calculate cumulative ratings as well as user reputation so as not to skew the results. Privacy is paramount for the company–no IP addresses or browsing history is ever saved, only ratings.The Helsinki, Finland-based company raised $500K this past summer from five investors, including from a large Finnish institituion Teollisuussijoitus. WOT’s corporate name is Against Intuition Oy.

According to Suurio, the company plans to make money by selling analysis to site owners, for example advice about how they can get better ratings. Notably, the company also plans to provide site owners with demographic information about WOT’s registered users. Registered users of WOT are required to supply information about their gender, where they live and when they were born. However, WOT will do this in such a way that it will keep user identities anonymous, not supplying their names, for example, said Suurio. You can use WOT without registering. However, you need to register if you’d like to customize your alert settings. For example, if you’re extra concerned about not getting spam when you’re surfing, you can set privacy alerts at a higher level than WOT’s default. Or if you have no minors using your computer, you can set WOT to drop alerts about adult content.

WOT was released in September 2006 for Firefox and quickly grew to 100k users. Earlier this month a new version for IE and Firefox was released. 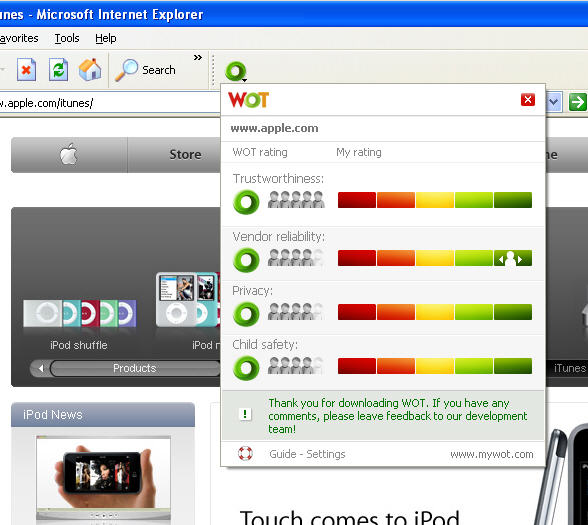 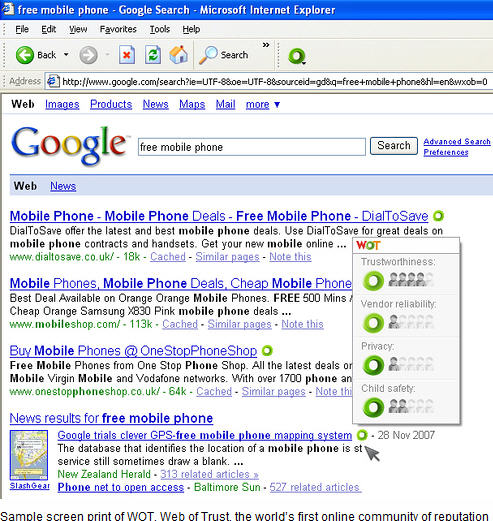