If you don’t know what to do New Year’s Eve, take a look at the parties on Going, a year-old event listing site. Mos Def’s ‘Sneakers Required’ party may not be that exciting for you if you’re not in the site’s targeted demographic of 21-29 year olds, but nightlife is only one area where Going wants to beat the competition (see our previous coverage here, here and here).

Going is all about “what’s happening?” and “who’s going?” in Boston, New York, Chicago, San Francisco, and Los Angeles — Miami will be added shortly. Events range from band tours to nightlife, restaurant openings, rock climbing, marathon training and lots in between. Wrapped around the user generated listings (75 percent of the site content is generated by users, according to the company) is a social network that the company sees as an augmentation of the popular social networks (MySpace, Facebook, etc.) in the sense that Going potentially introduces you to people with similar interests and allows you to manage your real-world social life with friends.

Recent improvements have been made to the recommendation layer of the site. Based on your past history of event attendance and any likes/dislikes you mark, Going offers a glimpse outside your immediate network by showing who attended the same events or has interests in common. Sounds like the start of a dating service, doesn’t it?

According to comScore, the website had 424,000 unique visitors in November. The company won’t be more specific about its traffic. It wouldn’t comment about revenue or profitability.

The company uses a nation-wide networks of promoters to build comprehensive, city-wide information. It has plans to add between ten and twenty more cities in 2008 and possibly to expand internationally in the second half of the year. Other players include Zvents, Eventful, Upcoming.org and Down2Night. But this is a tough sector. MingleNow and Judysbook and Attendio have fallen away, with Attendio saying it was abandoning events because users have failed to embrace such sites en masse.

As part of a strategy to get away from a strictly advertising and sponsorship revenue stream, Going.com has also expanded into ticket sales. So far, the company says, the ticketing add-on has been successful, reaching seven figures (tickets sold) for 2008.

Going is based in Boston, Mass., and has raised $3.5 million in a seed round and $5 million more in a Series A round earlier this year. It says it will look for Series B funding in the second half of 2008. 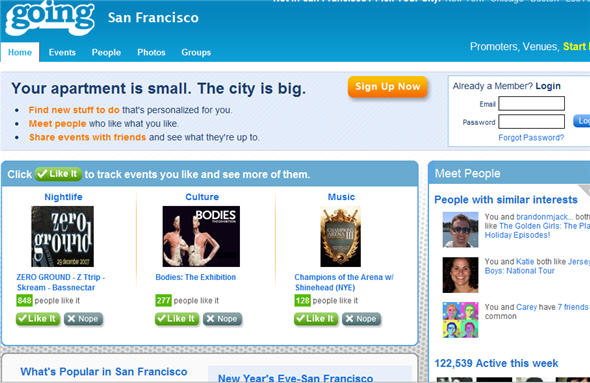