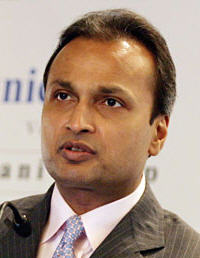 Stoke, a Silicon Valley company building a technology that allows multiple telecom networks to talk with each other — from WiFi, WiMax and others — has raised financing from one of the world’s fastest major telecommunications companies, Reliance Communications.

The amount was undisclosed, but a source told VentureBeat is was on the order of $10 million, or similar to the investment Reliance made recently in E-Band Communications, a US-based company that makes high-capacity wireless systems for the 70/80 GHz E-band spectrum.

Reliance is run by Anil Ambani (pictured here), reportedly the third-richest man in the India. [Update: The data on wealth is confusing. While Forbes in one report apparently puts Ambani’s wealth at $45 billion (which would make him the 4th wealthiest in the world), in another it estimates his worth at $18.2 billion.]

Stoke carries some cache, because it is backed by two of Silicon Valley’s top venture capital firms, Kleiner Perkins and Sequoia Capital, and because it’s one of the few ambitious wireless telecom startups to emerge in Silicon Valley in recent years. It has raised more than $50 million from its investors, which also include DAG Ventures. (We described Stoke in more detail when it raised a financing round earlier this year.)

Reliance of India, meanwhile, becomes Stoke’s first customer endorsement to be made public. In an interview, Stoke’s VP of marketing, Keith Higgins said Reliance is one of the more active telecom companies experimenting with technologies on the “edge,” or the place where its wireless various networks converge. These networks range from CDMA, to GSM, to the more futuristic WiMax and LTE. Stoke provides “convergence gateways” for multi-platform operators such as Reliance. When you arrive home from work, for example, and enter your house, Stoke lets your cellphone automatically switch from a cellular network outside to detect your home WiFi network.

The company had always expected that it would market its products first to foreign carriers, because “they’re moving faster,” Higgins said.

Stoke’s product is still being developed, and will likely need another round of funding at some point. Higgins said the company has enough money to last through to next year.