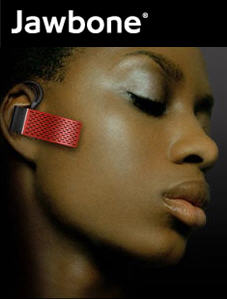 People wouldn’t stop telling me about Jawbone, the Bluetooth headset that shuts out incoming and outgoing noise with technology that has been tested in battlefield conditions.

So I picked one up over the holidays, for its standard price of $119. Here’s how good it is: After arriving back in San Francisco, I was on the noisy public transport system, BART, when my brother called. I answered with my Blackberry, but without the Jawbone. After exchanging a few words, my brother, an impatient business man, got frustrated with the raging noise of tracks and blaring service announcements in the background. He told me to call him back when I got to a land line. I hung up, pulled out my Jawbone, and called him back. “That better?,” I asked. Yes, he said, in amazement. “Do you hear anything in the background?,” I asked. “No, I don’t hear anything,” he said, and we talked peacefully for the rest of my trip.

Jawbone must be selling well, and that’s probably why Sequoia Capital, one of the valley’s top venture capital firms, has apparently just invested $30 million more into the company’s San Francisco-based parent company, Aliph. That adds to the $14 million the company already raised (see our earlier coverage ). Jawbone’s others backers include Vinod Khosla and Mayfield.

Another reason I bought it when I did is because it caught my eye while I was in a Verizon store. Its appearance in Verizon stores is relatively recent, and gives the Jawbone even more distribution. Previously it was carried in AT&T, Apple and Best Buy stores.

Techcrunch earlier caught rumors of a “boost” by Sequoia, but the size of the boost was just disclosed to us by a well-placed source. We’re trying to get a confirmation directly from the company.

I’ve since tested it in other conditions, including loud coffee stores such as Starbucks, restaurants, and in windy, rainy outdoors. I’ve found that in the worst of these conditions, the people I talk to can sometimes get a muffled effect, especially in the wind. But if I spoke clearly, the conversation went well enough in each situation. This will create new hassles for Starbucks: The chain plays loud music, in part, to keep folks from doing too much office work in their stores. Now they’ll have to gird themselves for the Jawbone crowd.

My recommendation to Jawbone: It’s time to come out with different shape, styles and colors. One drawback to buying a Jawbone is that there are already too many people sporting the exact same thing. There are only three different colors, all conservative. How about a hot pink for Valentine’s day?