Yahoo’s personal communications hub — Yahoo’s chief executive Jerry Yang provided a sneak peak at the company’s plan to unite search, contacts, and messaging (email and IM) to make it all easier. It’s still an early concept, but sounds pretty cool if Yahoo can pull it off. ZDNet has the best overview, with screen shots of the demo (images here courtesy of ZDNet’s Dan Farber). NYTimes’ Miguel Helft has a nice anecdote describing it: 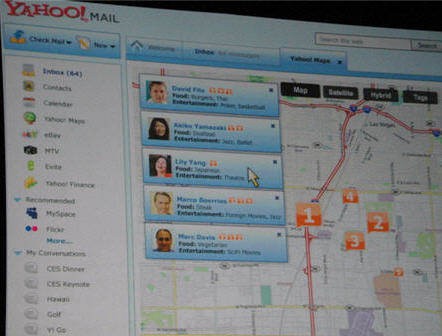 He [Yang] dragged an e-mail from co-founder David Filo suggesting dinner at a Las Vegas burger joint onto a Yahoo Maps icon, and up popped a map, highlighting the restaurant. Better yet, the software could recommend a list of suitable restaurants, ranked from 1 to 5, for a dinner between a handful of Yahoo execs based on their culinary preferences. Then, a selected restaurant could be dropped into an Evite icon, and an invitation to dinner would be automatically drafted and sent to others in the group.

Comcast to offer huge menus of films — The cable giant plans to offer subscribers a huge supply of movies and TV shows — some 6,000 titles, up from its current 300 –to be viewed demand and through the Internet through its new “wideband” technology which speeds up downloads. Details here.

Microsoft signs deals, for big video offering — Microsoft announced partnerships on Monday with Walt Disney, NBC Universal and Metro-Goldwyn-Mayer to bolster online video sales and step up competition with the iTunes operation of Apple. The NYTimes has details. Microsoft said that owners of its Xbox 360 games console would be able to buy shows like “Desperate Housewives” from the ABC network of Disney, and they could watch movies including “Rocky” from MGM.

HD DVD looks dead — Paramount is reportedly about to drop its support of the HD DVD format after Warner Brothers decided to back Sony’s competing Blu-ray technology, a move that will “sound the death knell of HD DVD and bring the home entertainment format war to a definitive end,” according to the Financial Times. Universal Studios remains the only major studio to exclusively support the HD DVD format.

Yahoo to lead effort to modernize music? — Ian Rogers, Yahoo Music’s VP of product development, has been talking recently about the future of music on the internet. He says music should be easy to access and build communities around. Michael Arrington, in turn, thinks Roger’s ruminations mean that Yahoo Music has big changes up its sleeve, speculating that “it looks like Yahoo wants to spearhead an effort to create open standards around music buying, playing, managing and sharing.” Notably, this comes as Europe is pushing for unified DRM standards, which may or may not dovetail with Yahoo’s efforts.

CES highlights — Lot’s going on, including too much noise, but Dean Takahashi has a good roundup of the essentials, which include Zink’s printer service that uses now ink, and Sony’s move into navigation devices that calculate your location even when it loses connection with the GPS satellites that provide the basic service. It draws estimates based on your previous momentum, motion sensing, and other variables.

Big Think, a video site for big ideas, plans on little traffic — When intellectuals log onto the Internet, where do they go for their YouTube experience? Big Think. The new site launches with videos from leaders in academia, politics and science, and is admiringly reviewed in the NYTimes. It hopes it can bring in the brains with videos of interviews with big name thinkers, alongside social features encouraging discussion by visitors. Its founders are former PBS producers, and it’s backed by big names including Peter Thiel and Larry Summers, ex-president at Harvard. Others in the seed investment — in the low millions of dollars — include South Africa’s David Frankel, Nantucket Nectars’ Tom Scott and TV producer Gary David Goldberg. Unfortunately, we can’t help but think the Ivory Tower crowd who might be interested in spending much time on Big Think is probably painfully small — take the evidence of Fora.tv, a similarly “intellectual” video site that has operated for most of 2007 with very little attention, or traffic.

Be careful how you structure your company’s board — At first, it looked smart for the One Laptop Per Child computer company to appoint an Intel representative to its board. But the partnership between Intel and OLPC hit the rocks when an Intel saleswoman tried to persuade a Peruvian official to drop the country’s commitment to buy a quarter-million of the organization’s laptops in favor of Intel PCs. NYTimes has details.

Google’s patent application on technology that understands text in images and video — This would be huge for Google, if the patent were to be approved. It would make advertising beside all of its videos so much easier — and Google has a lot of them, through its YouTube subsidiary. Information Week has details.