The Russian financial group Finam has invested about $30 million for a 10 percent stake int London-based social network Badoo to help it grow in Russia.

The investment come at a time when social networks are growing quickly in Russia. While Russian-founded efforts are growing, however, they haven’t performed that well, according to a Finam executive talking with CNews. Badoo will launch in Russia soon, he said.

Russian social networks include Odnoklassniki.ru, Vkontakte and Moikrug.ru, each reporting they have several million users.

A Finam executive told CNews that Finam chose to invest in Badoo in part because it is executing well, but also because it focuses on photography, which is “uncharacteristic of Russia’.”

If you look at its site, its stands out for its Spartan feel, but that’s in part because it has no advertising.Notably, it was the second fastest growing search term on Google, according to Google’s Zeitgeist list last year, just behind first-place “iPhone” and above third place “Facebook.”

In 2005, Finam bought a 68.5% stake in Mamba, a dating community in Russia with more 9 million registered accounts, which is rumored to share the same technical founders with Badoo (there’s no information about Badoo’s founders on its site), according to Yakov Sadchikov, a Russian entrepreneur who follows the Russian start-up scene closely.

We looked for profile of people in the U.S. and Lorena’s profile, see below, was at the top. 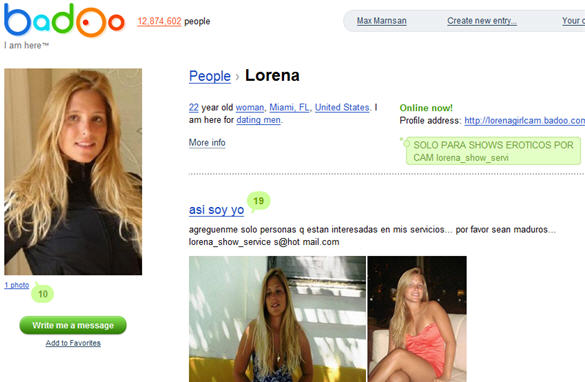