The days of the real estate boom are over, but nobody sent the memo to the internet companies.

Startups like Zillow and Trulia are still battling to become king of the listings market (see Trulia’s announcement about overtaking Zillow in popularity), while other sites like ActiveRain, which was just funded, seek to explore niches including real estate blogging and social networking.

The latest entrant: Roost, a real estate search engine that says its listings will be more complete than any other site, based on its partnerships with local realtor organizations.

Roost is opening today for 11 metropolitan areas, although some of the largest markets, like New York and San Francisco, are not included. To provide its listings, the company uses something called the Multiple Listing Service (MLS), which in fact refers to a number of different databases maintained by broker organizations around the country.

Other websites, like Zillow, rely on agents and home owners to post their own listings, which is only accurate as long as those two groups keep up with the website, putting up and removing their own listings as homes move on and off the market.

MLS data, on the other hand, has its own drawbacks. Although it’s generally complete and accurate, certain rules are required for its use, like presentation of data in specific formats and the inclusion of disclaimers; and, to complicate matters, each geographical MLS has its own rules.

Despite these difficulties, Roost’s engine looks very clean and, importantly, is very easy to navigate — a stark contrast to the clunky design of other sites that use the same data, like MLS.com. (Update: Redfin actually uses MLS data as well, and doesn’t look too shabby. It also serves a few markets that Roost doesn’t, and vice versa.)

Home listings are ranked by criteria like price and location, and the site makes it easy to visually compare different properties. 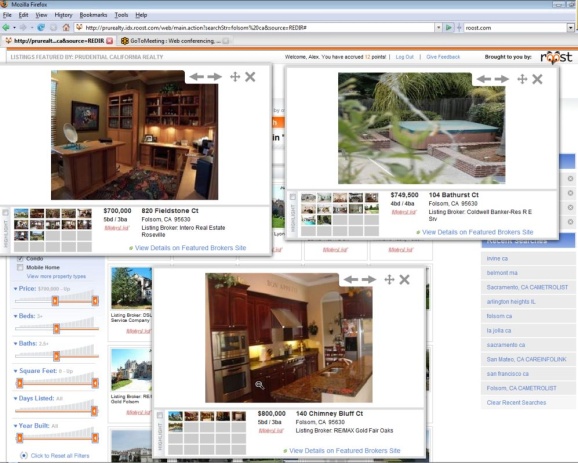 Its clean design and ease of use should establish Roost as a strong competitor to existing sites. However, it also doesn’t include any of the community features that help keep users browsing a Zillow or Trulia.

That’s part of the plan, for CEO Alex Chang. With two board members from Kayak, the travel search engine, and some visual similarities, Chang plans on sticking to the basics for the site, only adding more tools over time to perform custom real estate searches. Extra content, when it does come to the site, will only be in the form of links to outside content like local real estate blogs.

Another point of difference is Roost’s plan for monetizing. The site has no visual advertising, and probably never will, according to Chang. Instead, it will get referral fees for sending surfers to realtor sites, and will also provide white-label versions of its engine to agencies.

It should be interesting to see if Roost can compete in an already crowded market, jostling with big players like AOL Real Estate, HouseValues, and the two aforementioned sites, Zillow and Trulia.

Roost plans to launch in 25 markets by the end of the year. Here are the 11 it’s starting with now: Baltimore, Boise, Boston, Chicago, Dallas, Minneapolis, Orange County, Portland, Sacramento, San Diego, and Washington, D.C. The company itself is based in San Francisco, and has taken $5.5 million in funding from General Catalyst, Geolo Capital and the Cross Country Group. 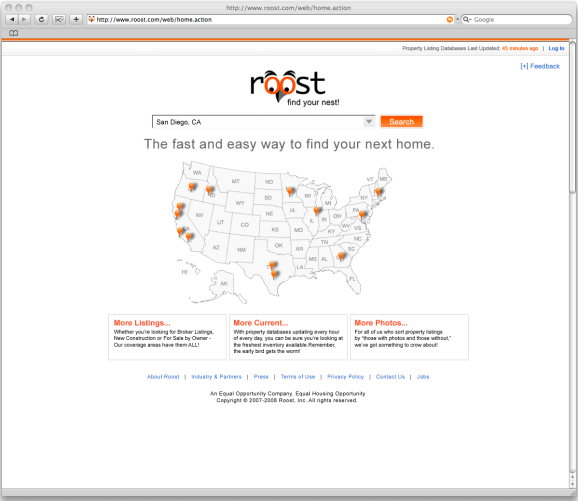 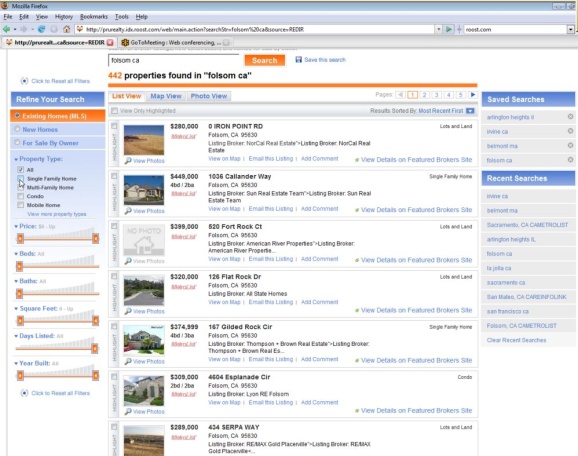