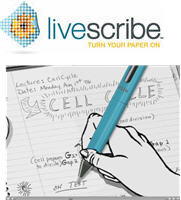 Livescribe, the company that has developed a computer pen that listens to what is said when you are using it, and which will let you post to your blog straight from your paper, has gotten $23.2 million in venture financing.

On Monday, at the DEMO conference, Oakland, Calif.-based Livescribe will share more details about its pen, and the tools that developers will be able to use to build applications on its open platform. The pen has not yet been made generally available, though you can pre-order it at Livescribe’s site for $200.

VentureBeat learned of the funding news separately. The round is led by VantagePoint Venture Partners.

Livescribe’s pen records audio and syncs it to what is written. So if you take notes with it during a lecture, and then stumble over your bad handwriting later when reviewing your notes, the pen can play the audio back to you at the part of the lecture where you stumbled. This lets you retrieve everything that was being said, even if you spaced out during the lecture admiring the birds and the bees outside.

That’s just the beginning of its capabilities. It does things like upload its stored information to your computer — text or audio — and so you can share it all with friends, or post your pen notes immediately to your MySpace page or blog with a few tap on your notebook. See our original coverage here.