Toktumi, of San Francisco, is a nifty little phone service that focuses on small businesses, letting them use VoIP easily by downloading a simple application to their PC — and then giving them big business-like phone features.

The basic phone feature is like Skype. However, Toktumi goes further by offering a bunch of additional features that make your service more office-like: things like an auto-attendant, transfer service (“press 1 for Sally, press 2 for David…”), conferencing and “search dialing,” which allows calls to be placed by typing names instead of numbers. Also, it works with your regular phone. You need to buy an adapter (in stores beginning next month), to hook your phone up to your PC, for that. But once you have, you can forward your regular phone’s number to Toktumi, and you can manage all calls to your service.

The service is hosted online, accessible via a Web dashboard.

In other words, Toktumi is a mix of Skype and a hosted PBX system, but without the cost of the hosted PBX.

The service is free if you want to use Toktumi only for incoming calls, or for calling other Toktumi users. I tried it out. The download was simple. Toktumi provided me with a free phone number to use for it. I had a friend call me — and it worked, but the voice quality wasn’t as good as your typical Skype call. There was more garble. There was also some static when we recorded our answering message. Toktumi is in beta testing, so we assume this part will clear up.

If you want the other business-like features, the service cost $12.95 a month per line, plus two cents a minute for calls made.

Search dialing is one of the cooler features. Type in “Matt Marshall” into Toktumi’s button (which sits on your desktop, see left), and Toktumi looks in your Outlook contacts, and even goes to the Web to find Matt Marshall’s in your area using Google local. You can type in “One Market,” and it provides you to top results such as One Market restaurant in SF. Toktumi may potentially offer related advertising, letting other local restaurants pay to be on the top of the search results. 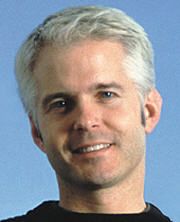 The company is founded by Peter Sisson (left), who previously ran Wineshopper during the Internet boom years, an ambitious effort to sell wine online. The company was bought out by Wine.com before the combined entity flamed out. He also founded Mixonic and Teleo, two smaller companies. But he’s still looking for his big win. Right now, his goal is to get Toktumi to two million desktops.

There are a ton of VoIP phone services out there these days, and Ribbit’s launch (see VentureBeat’s coverage today) suggests there will be thousands more. Other services like Grandcentral, have gained traction because they offer a single number. But Grandcentral is for inbound calls only; it doesn’t allow you place calls. Skype, meanwhile, doesn’t offer the business features.

Toktumi is a solid addition.

It’s still in testing, but you can request a download from the site.

The company raised $1.5 million in a seed round last year. Now that the service is launched, the company will start looking for a second round, on the order of $7 million, according to Sisson, in order to build out the team.