Web video may seem like a tough field for any company to enter, much less a nonprofit.

But the Participatory Culture Foundation, a 501(c)3 organization, says its Miro video player can play RSS-enabled videos hosted anywhere — and offers advantages over most of the for-profit video companies on the market.

For starters, it offers open standards and open source, and is a standalone player.

In order to use Miro, you need to download it from the Miro’s Web site or the site of the co-branding partners — TED will also be distributing it on USB sticks at the next conference — and then install it on your desktop. Once installed, the player uses RSS, BitTorrent and media-player technologies to let users download videos from anywhere on the Web. Through a range of RSS-based “channels,” Miro users can download new videos as they become available. (See screenshot below.) 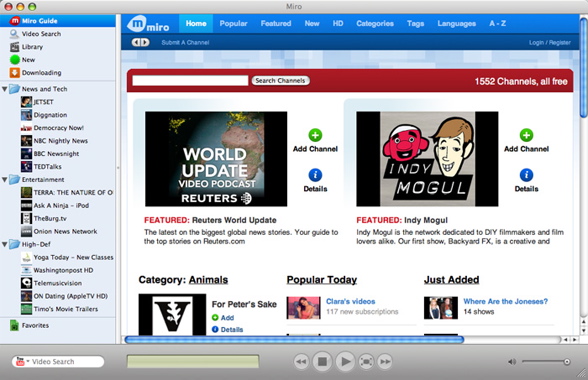 The Web TV company that may come closest to Miro’s model is VeohTV, a standalone player that downloads any video off Yahoo’s video index. When it launched, VeohTV took jabs at Joost’s limited library, which we reported here. But Miro still has an advantage, because it plays more formats, supports the BitTorrent peer-to-peer protocol (lowering costs for producers and increasing download speeds for viewers) and is open source, says Business Development Director Jesse Patel.

Miro’s model doesn’t just make for a better player with more content, he argues — by separating the viewing and the hosting of online videos, it also encourages free expression and creates a more diverse and vital “online video ecosystem.” If a popular player can view movies hosted anywhere, no single host — the obvious example being YouTube — controls access to a mass audience.

As an example, Patel cites journalist Wael Abbas, whose YouTube account was suspended after he posted videos documenting police brutality and torture in Egypt. YouTube said the videos were “gratuitously violent.”

The problem isn’t YouTube’s content guidelines, per se (which you can read here), but rather that one host can essentially decide what a large audience does or does not see, Patel says. If Abbas posts his videos anywhere else, his audience would have been dramatically smaller, so he has to play by YouTube’s rules. (The argument may be weakened since Abbas’ account was eventually reinstated.)

Miro, on the other hand, doesn’t have any content restrictions, and will play any RSS-enabled video, regardless of where it’s hosted. It’s also working on a plug-in that will download almost any video online. So if its viewership grows — the player currently has around 400,000 regular users — Miro will give producers access to a potentially vast audience, no matter where their video is hosted.

The player doesn’t raise any legal questions, either, Patel says, because it’s not promoting the download of any material with copyright issues, although such downloads are possible.

But will people even bother to download a separate player? That, in part, is where the co-branding comes in, Patel says. Through the new campaign, Deutsche Well, Revision 3 and TED will distribute versions of Miro redesigned with each company’s branding and preloaded with the company’s content. TED, for example, now has an easy way to distribute videos of its talks, while Miro benefits from the increased exposure — and some revenue too.

Similar announcements are coming soon, Patel says. The Participation Culture Foundation argues that the co-branded players also push forward the group’s mission, because the players will allow a much wider range of companies to provide content through customized desktop video applications.

If Miro is successful, Patel adds that other video players may also adopt more open standards in order to compete.

That’s big talk. Does the player live up to it? Well, I downloaded a version for myself and nothing jumped out as particularly mind-blowing. Still, I didn’t spend enough time exploring to get a sense of the breadth of the video library, and I like Miro’s rhetoric enough that I’ll keep poking around.

My goodwill aside, Miro will need to see some dramatic growth before it really starts living up to the foundation’s promises. The co-branding campaign does seem like a step in the right direction.

The Worcester, Mass.-based foundation also has some big names on its board, including Mozilla CEO John Lilly and BoingBoing blogger Cory Doctorow. The Participatory Culture Foundation draws most of its funding from donations and grants. Donors include Lilly, Mitch Kapor and the Knight Foundation. Patel says the foundation hopes to eventually become self-supporting.