With all the fancy software on the market, there’s a reason why many people are still trying to use the spreadsheet Microsoft Excel as a database, even though it’s not meant to be one, says Blist CEO Kevin Merritt. Even though the results can be clunky and involve a lot of square-peg-in-round-hole solutions, Merrit argues that for the layperson, everything else is just too hard.

That’s where Blist comes in. Through an easy-to-learn interface, non-technical types can build sophisticated databases containing information in a variety of formats, and they can search those databases without learning SQL or any other programming language.

Merritt gave me a quick demonstration of his product, showing off databases (called “blists”) that would have been tough to pull off in Excel. For example, he made one blist featuring the names of companies attending DEMO last week, logos, URLs, and tentative “star” ratings. Then he quickly searched for “five star” companies in a certain field.

I was also able to try out the Blist beta myself, and it’s as intuitive as the company claims. The default display format is a table, something that will be mighty reassuring to users who haven’t moved beyond Excel. Indeed, Blist can be used as a kind of “Excel-plus,” building what looks like a spreadsheet, but also giving you the ability to include text and numbers, and also documents, images and “pick lists”. For example, I built a database of stories recently published on VentureBeat, with authors chosen from a pick list, star ratings, URLs and company logos. (See screenshot below.) 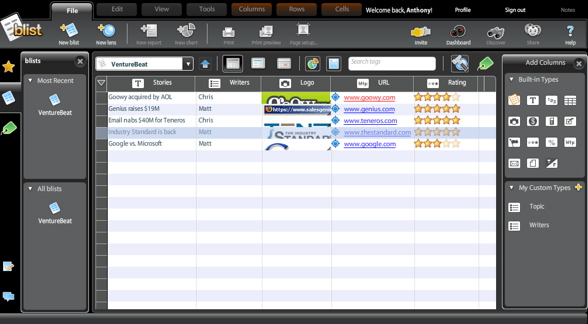 You can also try viewing your database in other formats, like a calendar, and you can build databases within databases.

If you’re a database whiz, someone who closely follows VentureBeat’s coverage of products like LongJump and Dabble DB, and who has strong, well-thought-out opinions about which databases stand out in the crowded marketplace — well, you may not need Blist.

If on the other hand, you’ve been trying to shoehorn a menagerie of strange formats into Excel and think that “SQL” is just a random string of letters, then relief is at hand, Merritt says. He pitches Blist, now on-line in beta form, as a product falling between Excel and database management/software development program Microsoft Access — it has Excel’s ease and usability, but is “nearly” as powerful as Access, he says.

“Every database out there today is engineered for, or by happenstance is used predominantly by, engineers or (database administrators),” Merritt says.

The Seattle-based company generated considerable buzz at DEMO, but that doesn’t mean it will find a mass audience. Its user-friendliness is undeniable (as VentureBeat’s resident “not an expert”, if I can build a database in just a few minutes, anyone can). The question is whether people frustrated enough with Excel and other spreadsheets to try something new. Or will they stick with what’s familiar?

Merritt says Blist has around $800,000 of private funding betting on the new, and may go out for a first round of venture dollars soon.