CareSquare, a social network that connects parents with babysitters, has raised $390,000 in seed funding, and appears to be raising more, VentureBeat has learned. A Hillsborough, Calif. firm called Kennelpoint is leading the funding.

CareSquare is going for a more community-oriented approach than competitors like Care.com and SitterCity. Chief executive Ariel Kleckner Ford said those sites function more like a babysitting agency, while CareSquare is more like a social network. The point is to get as many people on the network exchanging information as possible, Ford said. After all, parents usually ask friends and family for recommendations first, before going to an agency. 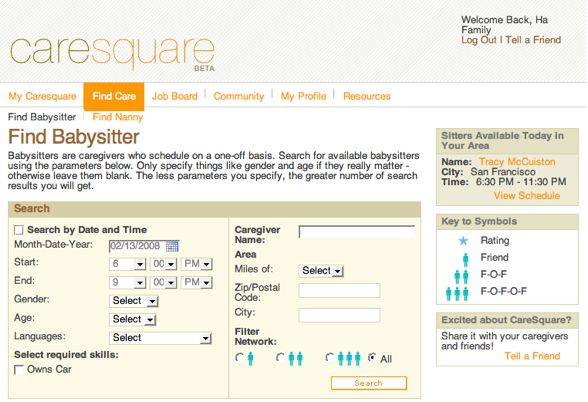 Care.com, for example, charges employers to look at babysitters’ profiles (our coverage), while CareSquare lets you look for free. Care.com also provides background checks on all babysitters, and while that’s an option on CareSquare, it’s not required.

As we noted in our coverage of Care.com, the site that develops the biggest network is the most likely to succeed. CareSquare’s approach could give it a leg up, and Ford said the response from caregivers has been “overwhelmingly” positive. To a large extent, that response is why CareSquare is adding elder care service (something competing sites already offer).

“Finding someone to care for a 2-year-old and a 92-year-old are not-too-surprisingly similar,” Ford said.

According to CareSquare’s web site, the company grew out of a real-life need, when Ford and co-founder Alex Kapinsky failed to find a babysitter in time for a play. The solution, they decided, was to create an online space where parents could find babysitters, and where they could also share information and recommendations about those babysitters.

And that’s exactly what CareSquare has been doing since it launched its test version about a year ago. Babysitters create profiles on the site, and customers can review and rate them. A parent who needs a babysitter can also enter the times when they need a sitter, and CareSquare can tell them who is available. (See screenshot above.) CareSquare also launched a job board last month.

The company should close on the seed round and launch a similar service for elder care in six to eight weeks, Ford said. Until then, she declined to offer any more details about the funding.

She declined to say exactly how many babysitters have joined CareSquare’s network. The Palo Alto, Calif.-based site has users across the nation, Ford said, but most are in San Francisco, Seattle and St. Paul, where CareSquare focused its testing.