At approximately 12:01am the Internet started erupting with love today.

First example: Twitter, down on and off most of the day – as has seemingly become the norm in recent weeks (our coverage) – came back online with a new feature just for Valentine’s day. Valentine tweets.

Though there is no official word from Twitter yet as to how this works, here’s the gist: You type out a Twitter message directed at someone, including the universal internet symbol for a heart: <3. So for example you would say: “@username <3″. Once you publish, a red heart icon with the person’s username you put after the @ symbol will appear. Then, the person you hearted will be pinged to ask if they ‘heart’ you back, via a giant ‘YES’ button. See screenshot above. 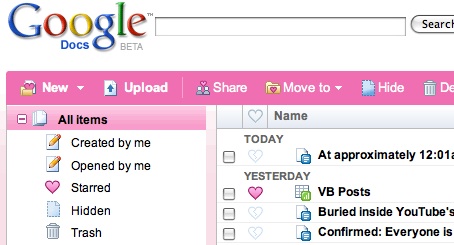 Twitter is hardly the only service spreading the Valentine’s day love. The Google Docs Blog wrote earlier about their holiday treat, a pink skin and the yellow stars replaced by hearts. Sure enough, this is now live and hideously wonderful.

Social aggregation service FriendFeed also has a special Valentine’s Day logo up. Nothing from Google’s main page yet, but you know it’s coming.

[update]: Twitter finally got around to posting on their new Valentine’s Day feature a mere 12 hours or so after we did. Read that here.