Outbrain is a new start-up that gives blog readers a way to rate and recommend news items, by using a recommendation engine that is similar to Amazon’s feature that offers up other items that people like you have already enjoyed.

While there are several such “collaborative filtering” recommendation engines such as Amazon’s on the market (there’s Last.fm for music, for example), there are few services that focus solely on news. There’s a competing service Spotback, but it lets people rate any content, and isn’t as focused. Outbrain offers site-owners a widget (see screenshot below) that lets readers rate each news article according a five-star system. That way, Outbrain can track what stories you like, and recommend similar stories going forward. Other people making similar choices as you have in the past will also see which ones you’ve ranked higher or lower.

The New York company was launched by Yaron Galai, the co-founder of Quigo, which recently was acquired by AOL for a reported $350 million (not bad, given that Quigo took only $40 million in capital). Quigo offers something similar to Google’s Adsense (ads that are placed besides relevant content), but Quigo served very large publishers who wanted more transparency than Google’s service provided. There, Galia worked with large companies like Fox, ABC, NBC, ESPN, Time Warner and some 250 newspapers. So maybe its no surprise that he’s focusing his next venture on serving the publishing industry.

Galia told me he was tired of wasting his time, reading over articles that he didn’t like, just because they were posted at a favorite Web site.

The company has just raised $5 million in a first round of capital from Gemini Israel Funds and Lightspeed Venture Partners. GlenRock Israel, which seeded the company early on, also participated.

Galia said thousands of websites have already installed the Outbrain widget, which can be gotten here. More information about how it works is here.

Outbrain also offers an API, so that news aggregation sites can also use it. 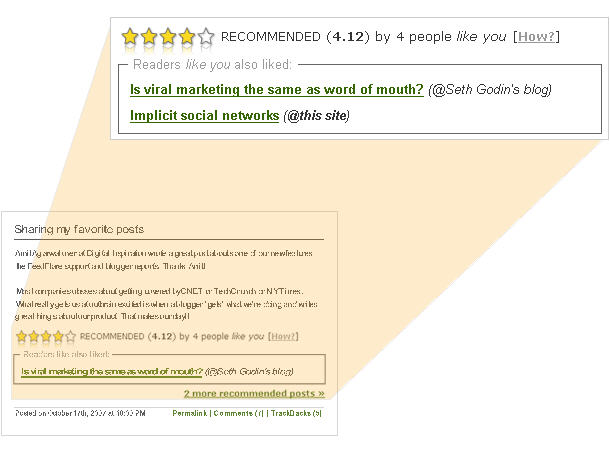