Zivity, the start-up featuring semi and fully nude women in different poses, has a simple model: Make a social network similar to Facebook or MySpace, but with two separate user bases — one being subscription-paying members, and the other being models and photographers who post (artistically) nude photo-sets on the site.

Zivity has proven itself something of an anomaly by raising $8 million to date from some well known venture firms. The first million came last year, and $7 million was just added on by Bluerun Ventures and Founders Fund.

However, it was John Malloy (left), of the Menlo Park, Calif. office of global venture firm BlueRun venturesFusionOne, who took the risk of being quoted in the funding announcement press release. Malloy, who previously backed more IT-focused companies like Riya, Slide and Varoli, was quoted as saying: “Zivity, much like Slide and PayPal before it, has a driven and talented team focused on challenging the status quo and creating a large new market opportunity.” Founders Fund Luke Nosek also joins the company’s board.

“If the MySpace anti-nudity team took a month off, they’d come back and there would be nudity everywhere. In the world we live in now, people want to be famous, they want to be creative,” he said. He’s hoping they want money, too — Zivity will share 40 percent of all its revenue with the models and photographers who post up sets, based on votes given out by members.

The site will also feature blogging and videos. There’s no requirement for nudity, but it’s obviously going to be the big selling point for members to shell out $10 a month.

There’s a bit of a chicken-and-egg problem. Unlike a site like SuicideGirls (which Banister says is just a niche site), that pays both models and photographers up-front, models will have to wait for money to accumulate from paying members. On the other hand, members won’t start paying unless there’s plenty of content.

And there is still social stigma attached to being a member of a site like Zivity, even if it looks more like Web 2.0 than Penthouse. It’s worth noting that PlayBoy has dealt with some of the same respectability issues. For more on that, read a recent interview on Freakonomics with its editorial director, Chris Napolitano.

Zivity will begin charging its 1,000+ beta members within the next three months, so we’ll soon see whether it can work. Banister says there are about 75 models with sets up on the site so far (and from a quick glance, some of them are pretty good-looking). The company, which is based in San Francisco, will remain in an invitation-only beta until early 2009. 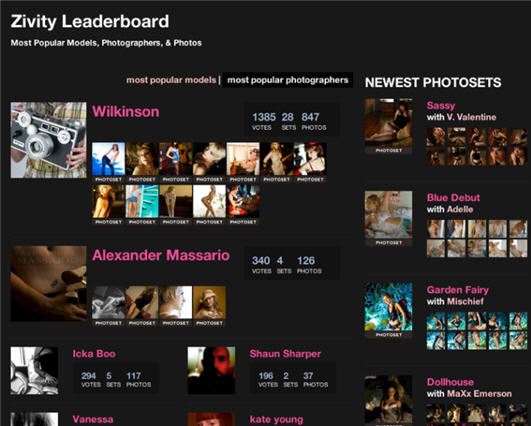