You usually see this logo (left) at the bottom of our posts since we use ShareThis to let readers share a story with their friends or co-workers. But it’s up top today because the San Francisco-based company has raised $15 million. 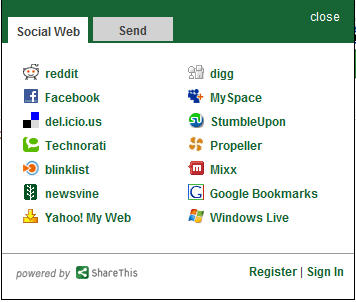 Draper Fisher Jurvetson led the round to support the promotion of the media-sharing service. The company has created a sharing button that can be easily embedded into web pages. A user clicks on the button, and it expands to give them all kinds of options to allow them to share the page with others (including submitting it to Digg, Reddit, or Mixx) through a single click. See image at left. Because it is convenient, it enables the viral spread of content across social networks, photo sites, news sites, and — yours truly — blogs.

The company launched the service in November, 2007 and saw rapid growth every month on the order of 50 percent each month. Thousands of sites have adopted it.

Now the company says it will use the new investment to roll out new services. That suggests it plans to operate a little like a Trojan Horse. It gets into your web site because of its sharing service. But once it’s there, it can add new services. Tim Schigel, the company’s CEO and a 10-year veteran of private equity firms, said in a statement that simple sharing solutions can generate great demand. The company previously raised its first round of $6 million last year from investors including Blue Chip Venture Company, Illinois Ventures, DFJ Mercury, Queen City Angels and RPM Ventures. Schigel, himself, led Blue Chip’s investment in ShareThis.