Mill River Labs has raised a $900,000 seed round for its start-up information wiki TradeVibes, which just launched in public testing mode.

TradeVibes is far from the only website to offer some kind of company database — read our hot-off-the-press coverage of LinkedIn‘s new features, for example — but chief executive David Li’s vision goes beyond creating an information repository. TradeVibes, he says, can become the center of not just business facts, but also debate and discussion.

Investors include the “godfather of Silicon Valley” Ron Conway, Dave McClure, the Kinsey Hills Group and Aydin Senkut’s Felicis Ventures. (Senkut is an investor in VentureBeat.)

Despite some respectable backing — and the impressive history of its four co-founders, who were all early PayPal employees — the Mountain View, Calif.-based company seems to face an uphill battle. For one thing, it doesn’t have the built-in publicity that CrunchBase gets from parent site TechCrunch, and it can’t draw on a large pool of existing users like LinkedIn’s new company directory (the former can be edited wiki-style by users, while the latter should be adding wiki features soon).

Li, on the other hand, is quite aware of TradeVibes’ competitors — you can look them up on TradeVibes’ “Mill River Labs” profile. In fact, the “competitors” page is one of TradeVibes’ best features. Not only can you see a list of competing and related companies, you can also draw up a chart comparing those companies’ web traffic. (See screenshot below.) Other features include a “start-up discovery” function that identifies start-ups in the TradeVibes database that might match your interests, as well as a customizable company information widget. It also helps that unlike some competitors, such as Hoovers, TradeVibes is free. 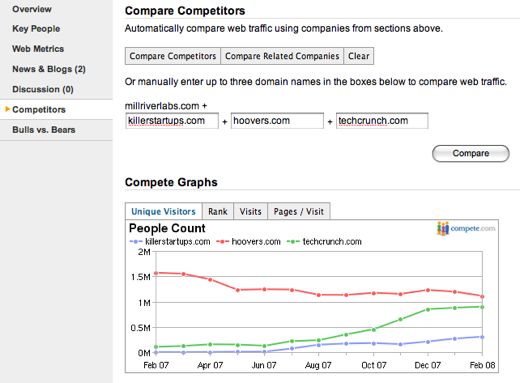 Above and beyond the individual features (which are mostly useful, but not groundbreaking), there’s TradeVibes general emphasis on social tools. After all, the wiki approach — and Li’s stated desire to “democratize company information” — is the heart of the TradeVibes concept, not an add-on as it is at CrunchBase and elsewhere. Not only can users write and edit TradeVibes company profiles, they can also submit relevant news stories, which other users can discuss and vote on. There’s also a “Bulls vs. Bears” option, in which you can vote on and argue about a company’s prospects.

So the site offers a bunch of interesting, possibly useful ways for entrepreneurs, investors and others to interact, and the whole package is quite intuitive. But, like any wiki, TradeVibes’ real value won’t become clear unless and until it attracts users. If it can’t, anyone visiting the site will find him or herself in an empty room — a nice room, but empty nonetheless. If, on the other hand, people start participating, then TradeVibes could build itself into a fun, informative and thriving community.