The latest versions of the web browsers Opera and Safari are claiming to have reached the big 100/100 score milestone in the Acid3 web standards compatibility test, making them the first browsers to do so. The two sides are thought to have completed the task within minutes of each other, both beating the much more popular Firefox and Internet Explorer browsers to the milestone.

The Acid browser test is developed by The Web Standards Project in order to check various parts of a web browser to ensure it is compatible with the latest set of web standards. Acid3 is the third variation of such a test, hence the “3”. Acid3 in particular tests for specifications that enable “web 2.0” dynamic applications to run as they were intended. A full list of those specifications can be found here.

To “pass” the test, a browser must receive a 100 out of 100 score and also must have a test image that is pixel perfect and run the test animation smoothly. The WebKit team (makers of Safari) claim to have completed the score requirement as well as the pixel perfect requirement.

You can test your own browser here simply by going to this URL: http://acid3.acidtests.org. For some reference points, my Firefox 3 beta received a 68/100 on the test, while my Camino browser received a 53/100. Apple’s latest released version of Safari (3.1) faired better, receiving a 75/100. 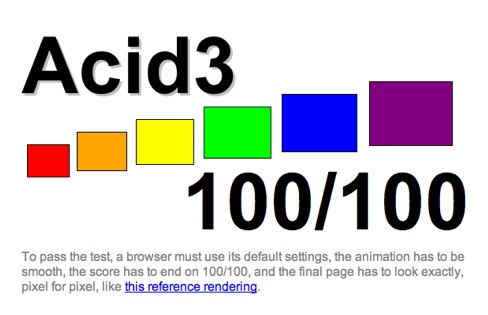 [Above: The image you will see if your browser passes the Acid3 test]

Safari was also the first browser to pass the Acid2 (the predecessor to the Acid3) test. It did so in 2005. Opera also passed that test while no final release version of either Firefox or Internet Explorer were able to. The Internet Explorer team made some headlines in December by saying that their early testing version of the unreleased Internet Explorer 8 had passed the Acid2 test. The new Acid3 test was released in the beginning of this month.

While passing the Acid2 test was not a huge priority for browser makers (hence why Firefox and Internet Explorer released builds never got around to it), passing Acid3 could become more important given its alignment with dynamic web application compatibility.