SightSpeed Light provides a Flash-based free video chat and video mail between MySpace users, but it is also integrated with SightSpeed on the desktop. The company has plans to relase the widget on social networks LinkedIn, Salesforce, Plaxo, Orkut, Hi5 and others, but so far it doesn’t have a date for these releases.

Last year, SightSpeed released Vlip, a video logging and video chat website aimed at the casual user, but it seems to have fallen off the map.

This seems to be SightSpeed’s first foray into directly attracting the casual user, whereas for years it has attracted businesses. In 2007, some 1.5 billion minutes were used on SightSpeed, the company boasts, but it won’t release metrics on the size of its user base, traction and growth, or profitability.

The original SightSpeed product, mostly used by businesses, is a Windows/Mac desktop video conferencing application that comes in three packages: free and ad supported, a premium $9.95/mo subscription model that includes multi-party chatting, extended video mail, and video mail tracking, as well as SightSpeed business with an admin console and report-building for $19.95/mo. 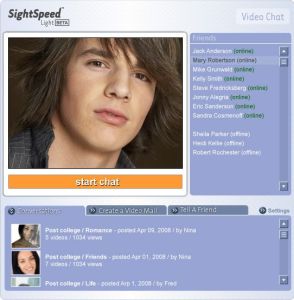 Chief Technology Officer Aron Rosenberg says he considers the widget as just one way video conferencing will reach a mass audience — and he wants to stay ahead of free competitors Oovoo, Tokbox, and Skype Video.

“For all the people who have heard of Skype, there are billions of people who have not, and millions who associate [Skype] with just phone conferencing. Skype may have 200 million users, but so did Yahoo,” he says in a thinly veiled comparison to Google’s eclipse of Yahoo even though Yahoo was once much bigger.

SightSpeed’s advantage over Skype and other competitors is quality, Rosenberg said. However, Oovoo and Tokbox offer multi-party video chat for free, which SightSpeed charges for.

VoIP phones from Vonage can be integrated with Sightspeed. Sighspeed can be co-branded and white labeled, has an open API, and it also works well with PC manufacturers says Rosenberg, taking another swipe at Skype by remarking how closed and un-interoperable Ebay’s stepchild is.

Sightspeed is included in every Creative Labs webcam installed, which Rosenberg credits for a significant chunk of the company’s distribution, as well as a partnership with Logitech, and has received rave reviews from PC Mag.

The future for SightSpeed is on the mobile device, says Rosenberg, who looks to the US to advance its phones in the upcoming years — Taiwan already has $100-$200 video phones he says.

So far, SightSpeed works with an Nokia N95 mobile phone, with plans to be accessible on the next-generation iPhone.

It certainly has been a serpentine journey for Rosenberg and crew, from the east coast in the late 90’s, through the dot-com bubble, and then out west to build the company.

Rosenberg hatched the idea as an undergrad student at Cornell University, where the video compression algorithms that power SightSpeed were developed under professor Toby Berger in 1996, before Rosenberg decided to make a working prototype in 1999.

He enlisted the help of Brad Treat, a first-year MBA student, and the two spent the next few years presenting at several business plan competitions. By early 2002 they had developed what Rosenberg calls a “sexy” product demo, as well as a great business plan.

Ithaca, New York — where Cornell is located — is not the best place for a software startup Rosenberg says, so he and Treat moved to Maryland pitched to various incubator companies. The pair secured office space and a few thousand dollars to hire interns from the University of Maryland’s incubator program — via an introduction from Rosenberg’s mother, a professor at UM.

As many software-based entrepreneurs do, Rosenberg trekked to Silicon Valley to pitch the product, now called SightSpeed, to a number of investors, before being offered term sheets from the Roda Group in Berkeley, Calif. On one condition: the company move to Berkeley. All this, Rosenberg says, during the smallest quarter for Venture Capital funding in the last 15 years — January 2003.

SightSpeed accepted the $1 million investment and moved across the country.

While the journey has been long, Rosenberg hopes that SightSpeed will be heading the pack into the future of video conferencing — although it remains to be seen if it can effectively attract the casual consumer market.