The days of keeping multiple browser tabs open as you jump between websites is over, says Vysr chief executive Guda Venkatesh. The Palo Alto, Calif. startup is launching RoamAbout — its platform for online services that can be used anywhere online — in public testing mode today.

We first wrote about Vysr back in 2006, when the company raised $875,000, but it remained secretive about its plans. Well, now we know what it’s been working on. With RoamAbout, users can open a menu that provides them with a range of services that can interact with any web page: reusable registration, maps and directions (see screenshot below), connecting to social networks and more. The idea, says Venkatesh, is to create a web experience that’s “user-centric,” rather than “site-centric” — in other words, you shouldn’t have to leave a web page to access the extra services and information that you want. 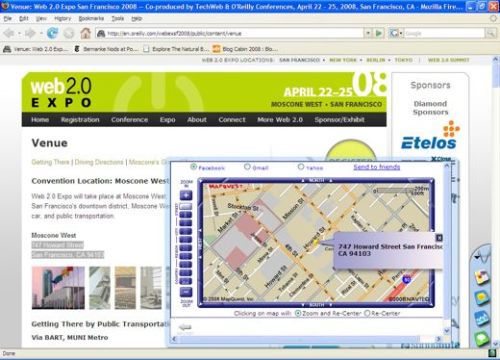 Other companies are trying out similar ideas — most prominently through browser toolbars, some developed by big companies like Yahoo, others by startups like Conduit. Vysr is different. For one thing, it’s not a toolbar, but a browser extension that only shows up when you want it to. (I also just covered a company called Apture, which offers a similar browsing experience, and doesn’t require users to download anything. But with Apture, each interaction is specifically designed by the page owner.) More importantly, Vysr isn’t designed around a limited set of features, but is meant to be a platform for third-party application developers. Vysr’s initial functionality is cool, but what’s really exciting is the potential that could be unlocked by other companies who take advantage of Vysr’s application programming interfaces to provide new services that, again, you can use on any web page.

Advertising is a big part of Vysr’s business plan. When you open a RoamAbout window, any advertising inside the window will come from whichever site or application you’re accessing. But RoamAbout can place contextual text ads in the border around the window — and since the service will know exactly how you’re interacting with the page, those ads can be very carefully targeted.

The startup has raised around $2 million in angel funding, and backers include Ron Conway, The Sandhill Group and Mark Sherman of Battery Ventures. Venkatesh says he plans to go out for a second round of funding in the third quarter of 2008. Stanford professor Rajeev Motwani, an early Google investor, is also on Vysr’s advisory board.