Henk Rogers is an entrepreneur who knows how to hustle. You can thank him as the man who introduced Tetris to the Western hemisphere.

The son of a traveling jewelry executive, he was born in Amsterdam, moved to New York, and learned computer science at the University of Hawaii. In 1988, he saw a video game called “Tetris” at a Las Vegas trade show. He discovered it was being distributed under a master license which wasn’t being honored. Convinced it was a hit, he made an uninvited trip to Moscow to obtain a license for the game from the Soviet Union government organization ELORG. He convinced Nintendo’s CEO, Hiroshi Yamauchi, to license the game for its console. His success in securing the rights to Tetris helped Nintendo beat Atari in the console wars. At the same time, Rogers helped the game’s Russian inventor, Alexey Pajitnov, move to the United States. In 1996, the rights for Tetris reverted to Pajitnov. Rogers moved from Japan to Hawaii, where he founded Blue Planet Software to manage the intellectual property rights for Tetris. He also founded Blue Lava Wireless in 2002 to develop mobile gaming software. In 2005, he scored big as he sold Blue Lava and the Tetris rights to Jamdat for $137 million. (Jamdat has since been acquired by Electronic Arts.) 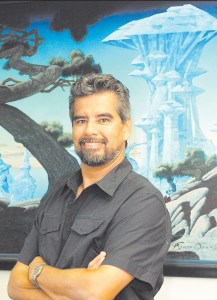 He used that money to help set up some new startups, such as Avatar Reality, which is making an online game called “Blue Mars.” But Rogers isn’t all about business. In 2007, he set up the Honolulu-based Blue Planet Foundation, a nonprofit aimed at addressing global warming. In April, the foundation hosted the Blue Planet Summit with high-level energy experts to brainstorm ideas on changing energy consumption. I caught up with him in a Honolulu high-rise office with a view of the ocean and a mini-museum of Tetris in the foyer. Here is an edited transcript of our talk.

VB: Tell me about the foundation.
Rogers: Our mission is to get the planet off carbon-based fuel. Nothing less than that. We’re going to start with fossil fuel. That’s the obvious one that is killing us now anyway. We start with Hawaii because we are in Hawaii.

The first thing we had to do was get people who know about it. That was what we did at the summit. We had scientists, engineers, politicians, business people, and this category of wise men, people from indigenous cultures who wind up being the victims of what we do. They also have lessons that we have forgotten. We lost the connection to our elders who said, ‘You shouldn’t do this or you will destroy the earth.’ The sustainability lessons are what we left behind in deference to shareholder value.

If you’re destroying the environment, you’re paying for it. Your children are paying for it. In Hawaiian culture, you have to be responsible for seven generations down the line. You’re living in the benefits of what seven generations back did for you. A hundred years from now, are they going to say we were idiots because our fossil fuels raised the sea level by 40 feet. It caused us to move two billion people by 100 miles. It cost untold money and untold wars. What happens when we have to move all the people in Bangladesh? 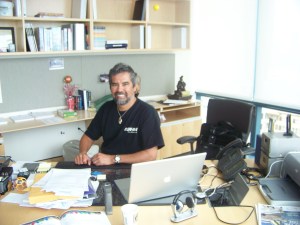 VB: How did the summit go?
Rogers: It was a great success. We had some stars like Bobby Kennedy Jr. We had Dennis Hayes, the inventor of Earth Day. We had James Woolsey, who used to run the CIA. We had the president of the University of Hawaii. We had Steve Schneider, who got the Nobel Peace Prize along with Al Gore on global warming. We had a Navajo woman who said in response to nuclear energy that it is not a “clean energy.”

VB: What did you hear on how to fix things?
Rogers: In Hawaii, we have every imaginable alternative energy compared with any place else in the United States. We have the best solar because we’re closer to the equator. We have wind. We’re the trade wind capital of the U.S. About 95 percent of the time, the wind blows fairly strongly from the same direction. These are intermittent sources of energy. The problem is they are there or not there, depending on timing. You can’t turn oil off, because you don’t when the wind is going to die. That’s really goofy.

One source we have in Hawaii that we could use is geo-thermal. Iceland was the poorest country in Europe. Then they decided to get off oil. Now they get 87 percent of their energy from geo-thermal and they get 13 percent from hydro-electric, or water power. That means they are 100 percent oil-free. They are now the fourth-richest nation in the world per capital. They went from the worst in Europe to one of the richest in the world. That seems to me a formula for success for this entire country.

We lose $6.5 billion from Hawaii to the Middle East every year. About 93 percent of our electricity comes from oil. How dumb is that? Geo-thermal is one solution. The problem is getting it from the Big Island to here. To lay a cable that long and deep is a problem. You could lose it in an earthquake.

An answer is ocean-thermal-energy conversion. You use the heat of the ocean, the temperature difference, to create electricity. We plant a platform out there in the ocean, sort of like a tanker. It takes the temperature of the water thousands of feet down. You run a liquid, not water, up and down. It’s 40 degrees at the bottom. When it reaches the top at 80 degrees, the liquid boils. It gets a turbine going. 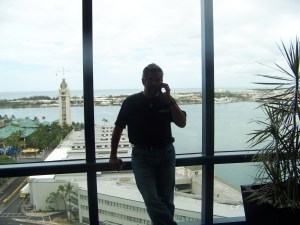 VB: Isn’t it interesting that the success from Tetris can help fund this?
Rogers: A couple of years ago, I had a life-altering event. I had a heart attack. I came very close to dying. I was in the ambulance, looking up. I said, “You gotta be kidding me.” I made a pile of cash. It was a month after I sold my previous company. I hadn’t spent any of it. It was not time for me to go. There is stuff that I had to do. I said I would survive it no matter what. I had a lot of time to think about it.
VB: What did you do?
Rogers: I thought about what I really want to do. That’s what it was coming down to. To me, this is heaven. Hell is getting to the end of your life and not having done what you needed to do. I made enough money. I raised four kids. They are all grown up. I felt I hadn’t contributed something to mankind yet. That’s really what I want to do. That would make me feel my time was worth something. I came up with four missions. First one is to get the planet off carbon-based fuel. That’s the one I am focused on.
VB: Three more to go after that?
Rogers: The others won’t happen in my lifetime. My No. 2 is to get the planet off war. You would think that is easier. If we remove the cause of war, fighting over oil, and eventually, fighting over water, we can address No. 2. When we get to 9 billion people, water is going to be an issue. People are going to be fighting over water. One of the by-products of OTE is fresh water. 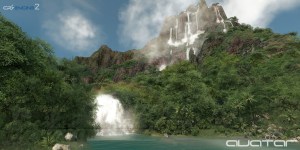 VB: Is Blue Mars (terraforming the red planet, as is the subject of one of a game by a Rogers-owned company Avatar Reality) one of the goals?
Rogers: That’s No. 3. We need to make a back-up of life on Earth. We need to take each species on Earth and make a backup and populate other planets. If you look at the dinosaurs, look at the rock that hit us. The last one wiped out 95 percent of all species in the ocean and 85 percent of all species on land. It could happen again. I’m not losing sleep over it. But a backup is a prudent thing. That’s something I’ve done with my computer since college. First thing you do is make a backup. Hello, we gotta make backups.
VB: Is that what made you think about doing the Blue Mars virtual world?
Rogers: They come together. It’s something that should eventually happen. I like the idea of people getting familiar with the idea. If we have cities on Mars, you can get a sense for how we could do this. When I go to the Big Island, you can see below, going to the ocean, how there are all lava flows. Nothing grows there. It’s just rock, maybe fountain grass. There is no soil. Not much rain. The other side gets lots of range. But we have patches where we have terra-formed. They built hotels. It’s a tropical paradise. That is exactly what we would have to do on Mars. We terra-form it. We grind up the rock and make a golf course out of it. We sprinkle seeds and have grass growing. How hard can it be? We don’t have to do it to all of Mars. We could do a small part and it would be like a zoo. Life has its way. It will leak out. It will spread like the fountain grass on the Big Island. 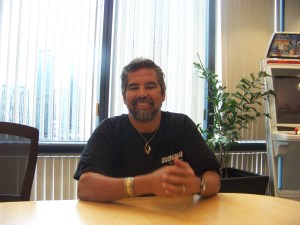 VB: What is No. 4?
Rogers: It’s way out there. I’m curious about how the universe ends. If we figure out how it ends, we should do something about it. It’s just to get things in perspective. I live on the Big Island part time. An astronomer who looks at planets told me this. If the sun is a grain of sand, you can fill a little podium with 100 billion grains of sun. You take the sand in the podium, spread it out over the air a thousand times the size of the U.S. You get an idea of how spread out things are. That’s how big the galaxy is, and that’s a small part of the galaxy. We see the scum on top of the pond. We don’t have any idea. I think we should know.
VB: I like that phrase. We are just pond scum.
Rogers: Maybe we are star dust.
VB: Is it ironic that the more successful something like Tetris is, the more energy it consumes.
Rogers: How do we get out of our present predicament? It isn’t by doing nothing. We have to make decisions and use our intelligence. Tetris helps. In normal life, we have to make decisions. In Tetris, you make decisions all of the time. It hits a pleasure center. You make a series of decisions. We need to be decisive and get in the mode of making decisions. We had a scientist conclude that Tetris can build up your gray matter in the hand-eye coordination section of your brain. That’s the same section where they measure intelligence. We could use more intelligence in the world. I don’t feel bad about converting some of the electricity Tetris uses and creating intelligence. We need to conserve energy, yes. But we need to do that more in places where we throw away energy, like throwing away solar energy and using fossil fuels instead. How dumb can we get? We burn 300 years of fossil energy per year. That can’t be right. The acidity of the ocean is going up. We lose the coral.
VB: The more successful you make your businesses, the more you help this cause.
Rogers: I made a decision to only work three days a week. When I am not here and I am on the Big Island I think about other things. I’ve got these start-ups. They are going to raise money. That is because some of the money that I have is now going to go toward other things, like the Blue Planet Foundation.