Buzzd, a location-based mobile startup, has raised a first round of funding from Greycroft Partners and Monitor Ventures. The company isn’t disclosing the size of the round.

Buzzd and competing companies such as Loopt and Google’s Dodgeball allow mobile users to access information and contact friends based on their location. With Buzzd, you send out your address or zip code via SMS message, and the New York startup’s service connects you to listings for nearby events, clubs and restaurants. While you’re out, you can send out a review, and those reviews are featured prominently in the listings. Buzzd bills itself as a mobile social network, and it allows users to create profiles (or import them from Facebook) and send each other private messages.

The big tech companies also have offerings in this market, but Dodgeball, for example, is focused on messaging and doesn’t offer event listings. Silicon Valley’s Loopt has also been getting a lot of positive press, but it only works on GPS-enabled phones. Buzzd, on the other hand, can be used with GPS, but it’s not required — as I mentioned above, the service works with an address or zip code.

Buzzd also announced that it’s partnering with Hornitos Tequila in a deal that allows users to buy SMS coupons for their friends, which can be redeemed for free drinks. Other partners include Flavorpill Productions, CitySearch, Time Out Group and voice search company V-Enable.

Update: I just spoke to chief executive Nihal Mehta, and he emphasized that one of Buzzd’s big advantages is that you it’s free, and you can use it without having it pre-installed or downloading anything (unlike Loopt.) 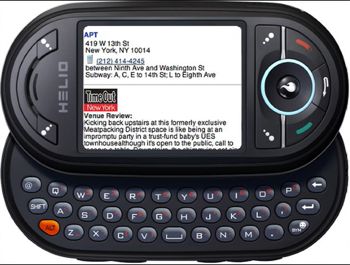 The company has three offerings right now — platforms for Flavorpill and Time Out, and the Buzzd service itself, which launched in testing mode in February. Mehta declined to offer any exact user numbers, but he says that so far, the most adoption has come through Buzzd’s partnership with troubled mobile company Helio. With around 200,000 subscribers, Helio doesn’t provide a huge market, but there’s good overlap between Helio’s users and the Buzzd target demographic, Mehta says.

Buzzd plans to roll out some new features in the coming months, including photo and video posting, as well as integration with the iPhone and Google Android.