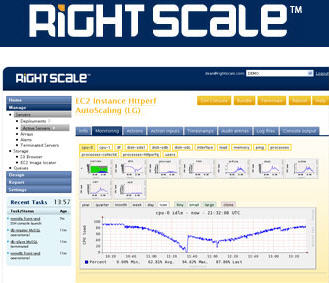 The Santa Barbara, Calif., company helps businesses manage their Web sites by transitioning them to Amazon’s Elastic Compute Cloud (EC2), or remote servers that lets businesses pay as they go, rather than buy and upkeep their own servers. Businesses can use a RightScale online dashboard to control their server clusters, and also automate the process of scaling up to more clusters if necessary.

Companies like WeoCeo and Intridea offer similar services, but chief executive Michael Crandall says RightScale stands out because of its visual interface and because the startup uses its own servers to constantly monitor the system. Search giant Google recently announced that it’s also getting into web app deployment. Crandall (and others) say the Google App Engine a much more “closed” solution — for example, Google web applications have to use the company’s BigTable database. RightScale, on the other hand, is more flexible and transparent.

RightScale is beginning by serving start-ups, and says it has 70 paying customers, as well as thousands of companies using its free service. Investor Benchmark was also an investor in Web infrastructure companies like database company MySQL (sold to Sun for $1 billion recently), and also in rails hosting company EngineYard. With these companies, Benchmark already has experience in building businesses by serving small companies first. The new cash will used by RightScale to offer more than just Amazon’s web services, also allowing for things like automatic MySQL setup on the cloud. Amazon’s web services already include database and and storage features.

[Anthony Ha contributed to this article.]