HopStop, a company that helps you get around via mass transit, has raised an undisclosed round of equity financing from investors including Quigo Technologies co-founder Yaron Galai.

Now, there are already a lot of direction services out there — including MapQuest, Yahoo and on the startup front, a voice recognition company called Dial Directions that lets you request directions over the phone — but HopStop is already rather unique in being transit-focused. There are some local transit sites, like the San Francisco Bay Area’s Transit.511.org. And then, of course, there’s one big tech competitor — a transit service from a little company called Google.

We asked Galai why he thought HopStop is a good investment, and he said this is one area where Google doesn’t have the best solution.

“The Google folks have a passion for cool algorithms, but no passion whatsoever for local transit,” he said.

I haven’t used HopStop much myself, but I see that the directions are also much more detailed, which is important when you’re riding an unfamiliar bus line (see screenshot below). 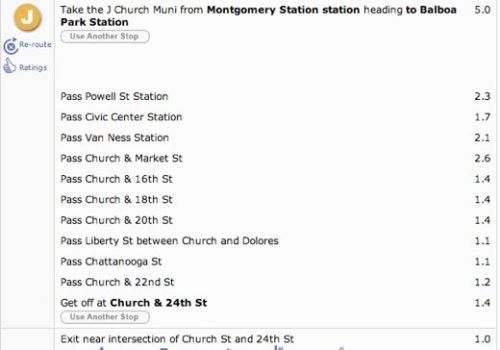 The site is also a good place for local advertising, Galai said, with past advertisers including The New York Times and Wachovia Bank.