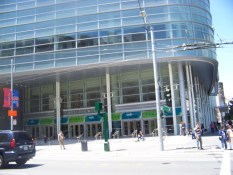 I spent four days this week at the Web 2.0 Expo at the Moscone West convention center in San Francisco. Here is a summary of the scene, including photos and my impressions of the show.

I attended the RockYou/Clearspring/Mixercast reception on Tuesday night at Bong Su, a trendy new Vietnamese restaurant. Three companies sponsored the party and so it made the Web 2.0 froth seem a little less excessive, since they can split the bill. There I met RockYou founder Lance Tokuda and enjoyed some fancy fried rice.

On Wednesday, Tim O’Reilly, the head of show organizer O’Reilly, kicked off the conference with a plea for innovation even in the midst of tough economic times. 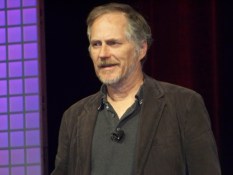 “If you follow the headlines, you might as well stay home,” O’Reilly (left) said as he opened the speeches on Wednesday. He praised the Internet as the ultimate platform and its ability to create a revolution in human augmentation. That means that, with the web at our fingertips, we won’t have to remember much. He also told the Web 2.0 denizens to harness the collective intelligence of the web. He suggested we rise above the level of the single device and think about making software work across everything.

Go after the hard problems, he implored. “Do you think we’re really done yet?” We’re at the beginning, he said. And he cited a poem by Rainer Maria Rilke, “The Man Watching,” which O’Reilly said he read to his father on his death bed. It’s about how you can grow by being defeated by those who are greater than you are. 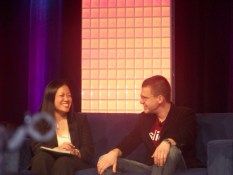 That led to the conversation with wunderkind Max Levchin, the CEO of Slide, an event which we used to introduce our live blogging. Eric Eldon caught up with Levchin afterward for a Q&A. The talk inevitably led to “how do you make money?” question that every Web 2.0 company has to grapple with. Levchin made a rare admission for a CEO. He said he was “extremely uncomfortable” being in front of the crowd and was happy that all he could see out there in the audience was a bunch of bright lights. You see, CEOs are just like the rest of us. Except they have a lot more zeroes in their checkbooks. 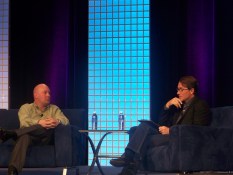 I was back bright and early the next morning to listen to John Battelle try to get Marc Andreessen to talk trash about Microsoft. But Andreessen (at left in image) was fairly diplomatic, saying only that he was happy there were “counter weights” to Microsoft such as Google. He was happy, he said, that the original ideas of the Netscape Navigator have survived (like the “back” button on browsers) and that something of Netscape lives on in Mozilla’s Firefox browser. He, like Levchin, has a company, the social networking platform Ning, in the $500 million valuation club. If Ning keeps going, it could become Andreessen’s third big start-up home run. 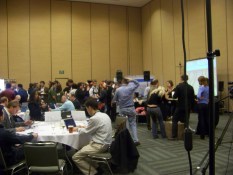 I hung out in the bloggers lounge, which was a lot more interesting a place than the actual press room. And it was almost as if the bloggers were more welcome than the mainstream press. In the blogging room, there were always dozens of people present. They served wine and beer as well as snacks. Bloggers could take a break playing with a Nintendo Wii or get a massage from a couple of professional masseuses. But nobody slept there, since everybody had to get out for the parties. I did, however, see a guy snoring away in the mainstream press room. The blogging room was also a place where it was easy to get pitched. It was easy to see that “data portability” was a trend.

I heard pitches from Dropio, which allows you to set up a “drop site” on the Internet where you can stash as much as 100 megabytes worth of stuff. The sites can expire, much like the Mission Impossible secret-agent tapes that self destruct in the TV shows/Tom Cruise movies. The company has just eight people in New York and it raised a $3.9 million first round from RRE Ventures and DFJ Gotham. 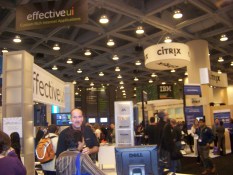 As soon as that pitch ended, I talked to the Fifth Generation Systems guys, who were unveiling a social networking virtual kitchen sink called Zude. Like with Dropio, you can use Zude to stuff all sorts of digital assets into this space for free. But in Zude’s case, your stuff doesn’t disappear.

You can toss your Facebook, MySpace and Friendster pages into it just by dragging and dropping. Once those pages are in a Zude folder, you can mash them up. You can minimize the size of the pages and click upon them to enlarge them. You can toss in YouTube videos and the Zude folder will keep the links to the original video. Then you can direct your friends to your mash-up. The Roslyn Heights, N.Y. company has 22 employees and raised more than $10 million in two rounds. 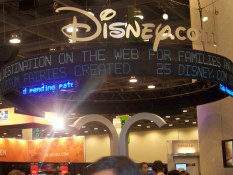 This was only the second year for the expo itself. It was interesting to walk through the exhibits during the Thursday afternoon booth crawl because there were big companies such as Disney.com, Intel, Microsoft, and others. Mixed with them were the smallest of Web 2.0 start-ups, like Yoono, a social networking management and media-sharing tool. And there were even investment oriented companies such as Steve Perlman’s Rearden, which incubates new technologies until they can be spun out as Rearden-funded start-ups. (We’ll post a Q&A with him soon). 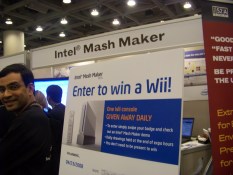 I thought Intel’s booth for its Mash Maker tool was funny. The company was giving away a Nintendo Wii game console. But there are no Intel chips in that device. I asked the Intel rep what was the deal. He said they tried to get an Apple TV, which does have an Intel chip, but they couldn’t get it. Hence, the Wii. I suppose that Intel has to get people to come to its booth. But you would think they would give away a gaming PC, so they could at least support the PC Gaming Alliance rather than the Wii, which might one day kill off PC gaming and all of those computers with Intel chips inside them. But what’s one Wii? 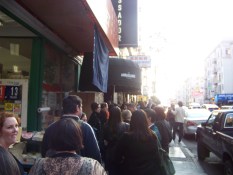 As soon as the booth crawl ended, I lugged my backpack to the car and drove off to the Ambassador lounge, where Girls in Tech, 24/7 and Glam were holding a very glamorous party. That’s the same place where VentureBeat will have its own Digital Media party next week. The line took an agonizing 20 minutes to get in the door, though a lot of well-dressed VIPs were being escorted right inside without waiting. I guess you had to know somebody important. I had to listen to the homeless guy sing songs to all of us and watch the paparazzi point and shoot. Inside, they really knew how to party like it was 1999. 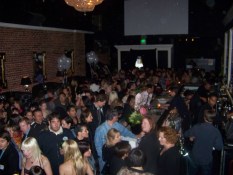 Inside, there were hundreds squeezed into the two-level bar. I was afraid that all of those beautiful people were going to squish me. I looked and wondered where all the geeks were. When I escaped, I drove over to the Microsoft party at the Mezzanine bar along with VentureBeat’s Anthony Ha. The glowing blue bar was a ghost town. Microsoft had announced an important technology, Live Mesh, as a platform to bridge desktop applications with cloud-based server apps. But Microsoft evangelist Michael Lehman was able to enlighten me on the Kool-Aid of Live Mesh. Yes, there was at least one geek at Web 2.0. 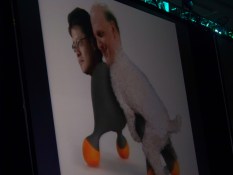 On Friday, I had fun blogging about Sun Microsystems CEO Jonathan Schwartz, Google’s outlook on spam, and Fake Steve Jobs’ view of the world. Fake Steve (also known as Forbes magazines’ Dan Lyons) was of course the most entertaining speaker of the morning. He worried about getting Twitter mobbed during his speech, but he said he thought better of it. After all, he said, now that he runs pictures on his site like the one on the left of Yahoo’s Jerry Yang and Microsoft’s Steve Ballmer, his reputation as a real journalist is seriously shot already. 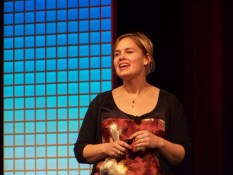 Full told, there were more than 10,000 attendees at the show, according to co-chair Jen Pahlka. That was up from 8,500 last year. Unafraid of the recession and Fakes Steve Jobs’ prognostication that we were at the peak of the Web 2.0 bubble, the O’Reilly folks are going forward with shows in New York, Tokyo and Berlin. The party is never going to end, baby! Seriously, it was hard to see any slowdown at this show, though talk about it was constant. And at the same time, I can’t say that I saw any innovations that knocked my socks off.